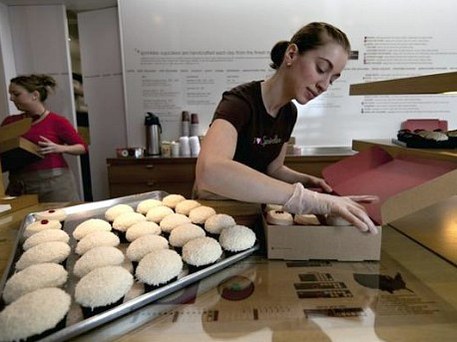 A tiny taste of the week's most interesting news

This week the news lines were lighting up with craft stories about cupcake automatic teller machines, a $50,000 vintage dress and how men are getting their sew on.

LA must really like cupcakes...
Beverly Hills now has what may be the first 24-hour cupcake ATM. Stuffed full of frosted mini-cakes from Sprinkles, a Beverly Hills bakery, the ATM-like machine hosts a touchscreen and robotic arm. Cake has just gotten a whole lot sweeter.
To learn which city is going to host the next cupcake dispensary, head to the Washington Post.

A $50,000 Dress that was made in 1954
Natalie Portman went to the Oscars last month looking fabulous (as per her usual) while wearing a vintage red polka dot Dior gown. This week that 1954 couture was up for sale and went for a whopping $50,000!
The Daily Mail has more on just way this vintage dress sold for so much.

Eco-Friendly Idea or Devious Master Plan?
England's newest initiative for spreading Olympic Games-pride encourages Brits to gild their capital via golden marigolds and other flowers planted along windowsills and walkways. The hope is that the plants will bloom just in time for the Olympic Torch's arrival.
Head to the BBC News for more on how London is going all out, gardening-wise, for the Olympic Games.

At Least It's Not a Cheesy Pick-Up Line
Whether it's the new product line of man-geared sewing machines, the growing number of needle nights in pubs and other man-cave hot spots or just a crafty way to met the ladies (pun delightfully intended), men have been increasingly drawn to sewing as a hobby. Whatever the reason, we say the more the manlier.
For more on why men sew (as well as the most impressive display of sewing puns ever collected in one place) head to The Telegraph.

A Knitting Safety Net
In one of the week's more moving craft stories, the Wall Street Journal reports elderly Japanese tsunami survivors have turned to knitting and an impromptu support group to cope with the recent and still lingering effects of last spring's disasters.
Head to the Wall Street Journal for how the knitting support has impacted members.