Ideas for Smoothies that Are Healthy and Tasty (VIDEO) 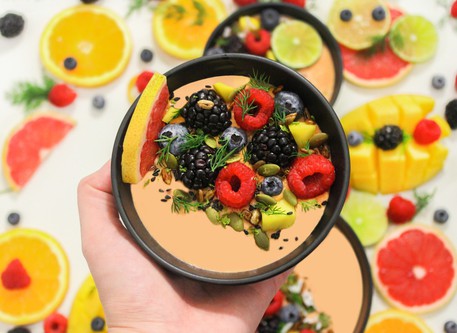 Making a smoothie with vegetables means knowing how they pair with fruit.

A lot of smoothie combinations are easy make tasty. Blend a couple of bananas with a handful of strawberries and a little yogurt and milk, and chances are the results will be pretty yummy. But what about those smoothies that take the nutrition to the next level and include a serving of vegetables and/or spices?

Sneaking vegetables into your child’s meal plan (or even your own) sounds great. It will increase the fibre in your diet, lower the sugar in your smoothie, and easily add antioxidants and vegetables to your body. All that said, few people think a cauliflower milkshake sounds like an awesome treat. So, what vegetables can you use, and which flavor combinations make them taste great? Here are suggestions for healthy ingredients along with flavor combinations and recipe ideas.
By the way, if any of these recipes seem a tad overwhelming, many companies now assemble the ingredients so all you have to do is blend. For example, Blendtopia products include a smoothie with ingredients intended to improve your skin and another chock full of superfoods.

One of the tricks to making zucchini work in a smoothie is freezing it. That step can helps give your drink a creamy texture. Another way to prepare the vegetable is to peel, steam and freeze it on a baking tray before using.
Since zucchini is mild, it doesn’t impart much flavor to the drink. That means it pairs pretty well with almost any other ingredient. What a zucchini doesn’t have in flavor, it makes up for in other ways: antioxidants and vitamin C, fibre and vitamin A and contains potassium and vitamin B6.
Recipes: Choosing Chia has instructions for a Nutty Banana Smoothie with banana, zucchini, almond butter, cinnamon and nut milk.
Running on Real Food has a Strawberry Mango Smoothie recipe with zucchini, cucumber, vanilla protein powder, almond milk, strawberry and mango.

Many types of squash can work in a smoothie, including acorn squash, butternut squash, pumpkin and almost any other type of squash. They boast an impressive number of vitamins — A, C, and E — and antioxidants and help with eyes, skin and your immune system. The flavor is slightly sweet and the texture creamy.
Some recipes call for raw squash, but you may have an easier time with pureed cooked chunks (even frozen ones). This may go without saying: Be sure to seed and peel the vegetable before cooking. The mild and sweet flavor of squash can go into almost any recipe where banana would fit and it pairs particularly well with nut butter, peach, turmeric, orange, and cinnamon.
Recipes: Running on Real Food has a recipe for Pumpkin Spice Latte Smoothie with coffee, almond milk, frozen banana, vanilla protein powder, pumpkin puree, and spices.
The Natural Nurturer has a Sunrise Butternut Squash Smoothie with bananas, cinnamon, raspberries, chia seeds and almond milk.
Beets
Beets are pretty divisive vegetables: Some people love ‘em, others are disgusted by them. There’s no denying, though, that they bring a regal mauve to any smoothie. They also have plenty of antioxidants, vitamin C and manganese.
Those who love the taste of beets appreciate its gently sweet flavor that pairs well with oranges, berries, ginger and carrots. Those who don’t just call it “weird.” Before you use beets in a smoothie, you’ll probably have to roast, boil or steam them and eventually freeze them.
Recipes: The Natural Nurturer has a “kid friendly” Pink Beet Smoothie with milk, strawberries, chia seeds, frozen banana, cooked beets, and nut butter.
Running on Real Food has instructions for Beet Orange Smoothie with spinach, vanilla protein powder, beet, zucchini, and orange.

A wide variety of vegetables fall in the leafy greens category: kale, chard, spinach and even romaine lettuce. If you don’t have a high speed blender, it may be tough to purify the leaves enough to blend into a smoothie.
While the health benefits of each vegetable vary a little, most have a lot of antioxidants and fibre, plus the ability to lower blood pressure. Be mindful that the greens’ smooth taste can turn bitter of you add too much, so follow any recipes with leafy vegetables carefully.
Recipes: Running on Real food has a recipe for a Green Monster smoothie with zucchini, celery, peaches, strawberries, plant-based milk, spirulina, hemp seeds and ginger root.
Choosing Chia has a Daily Greens Smoothie with spinach, avocado, banana, hemp hearts, chia seeds and nut milk.