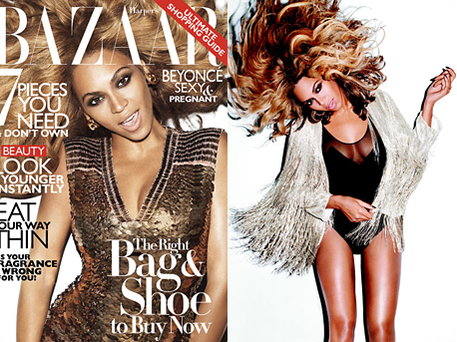 When Beyonce posed for Terry Richardson's November 2011 Harper's Bazaar cover, she was decked out in clothing that costs thousands of dollars. You can watch the behind-the-scenes video below, including the rainy rooftop where some of the shoot occurred. You may have access to a rainy roof, but not thousands of dollars for duds. We found a few vintage (or, okay, close enough) things on eBay you might like just as much—or, given that they're a bargain, even better.

For the cover of Harper's Bazaar, Beyonce wore a metallic Reed Krakoff mermaid-esque mini dress valued at $6,990 (aka several months rent). While it isn't easy to find Reed Krakoff on eBay, we did come across this '90s handmade cocktail party skirt covered with gold and bronze sequins, with a starting bid of $26.99 (aka several burgers at McDonald's that you probably don't want to eat if you're going to look good in this dress).

While this '80s strapless flapper party dress relies more on gold fringe to make a statement than sequins, we have a hunch Beyonce would probably make a bid if it's starting at $24.99.

The black Norma Kamali swimsuit (a pregnant) Beyonce wore in another shot was a little more reasonably priced at $185. Still there's plenty of Norma Kamali to be found on eBay (as long as you're cool with buying a swimsuit off of eBay). This tankini-top skirted swimsuit has optional straps and a buy-it now price of only $19.99.

An '80s vintage Norma Kamali black ruched strappy tube dress at $272 isn't quite as cheap as a swimsuit, but works nicely if you want to create a similar visual without looking like you just walked off the beach wearing a silver shawl. 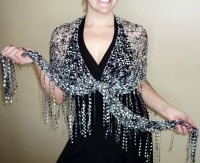 Oh yes, you will need a silver shawl. The Salvatore Ferragamo "beaded jacket" Beyonce wears isn't priced, which probably means you can't afford it. On Etsy, The TotheNinesShop sells a silver shawl for $55. The creator also offers to make custom orders if you'd like something a little more "Freakum Dress."
Beyonce Interview •