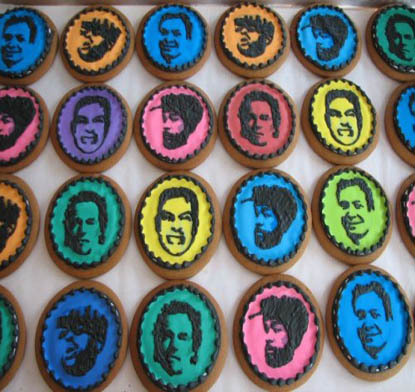 Whether you’re cuckoo for Coco or a fan of Fallon, there are more than a few ways to show your love for your favorite late-night host with these crafty ideas from around the blogosphere. 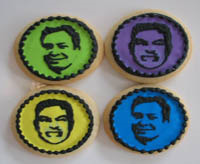 Whipped, a cool bakery in my Philadelphia hometown, came up with these pop-art inspired cookies bearing Jimmy Fallon’s likeness. They sent the cookies over to NBC for the episode where Jimmy sang “Whip My Hair” with Bruce Springsteen (who, don’t worry, also got cookies with his own face).
Check out the Jimmy Fallon customized cookies from Whipped Bakeshop! 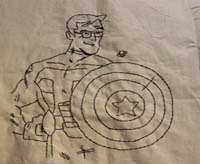 SubversiveCrafting.com
There’s Just Something About Stephen …

Is it his Reagan hairdo? His Brooks Brothers suits? Because everyone wants their own portrait of Stephen Colbert. Like this crafter, who put Colbert’s face on a sofa (don’t say I didn’t warn you before clicking that link). I like this simple embroidered depiction of him dressed as Captain America.
Check out the Stephen Colbert-Captain America from Subversive Crafting.

Conan O’Brien has been showing off fan-made crafts before commercial breaks on his show. (Which, thankfully, is on an earlier timeslot when us grannies are still awake.) This amigurumi blimp made it on one of those segments and has been an internet favorite ever since.
Get the free Conan O’Brien blimp crochet pattern from Crafty is Cool!

PastVersusPresents.Etsy.com
… And Then There’s Leno

Is it telling that the only craft featuring Jay Leno uses a vintage clipping? Not that we have anything against the guy! If you have any old Mad magazines lying around, the caricatures make great little decorations for matchboxes.
Get your own vintage-inspired Jay Leno matchbox from Past Versus Presents!

BadgesByQuake.Etsy.com
You Think There Would Be an Embroidered Top-10 List …

Crafters also like to use old-timey images of David Letterman. This decoupaged magnet uses a photo from a vintage Playboy (see, someone was reading it for the articles) plus Barbara Kruger-esque word art. Another cool idea for a party favor or thank you gift.
Get the retro David Letterman magnet from Badges by Quake!