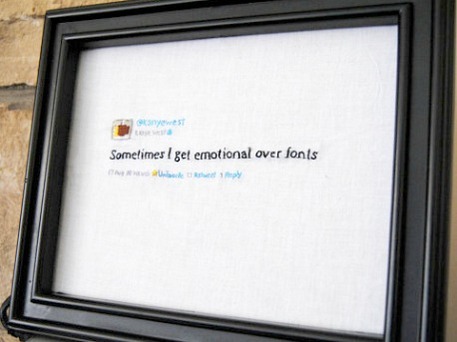 Apparently Kanye West is our sage of the age, if the embroidered Twitter posts by Amy Sheridan, owner of Etsy shop Drop Dead Quirky, are any measure. Reported earlier this week on NPR, Sheridan embroiders the controversial musician's tweets, including such prophetic wisdoms as "Fur pillows are hard to actually sleep on" and "Sometimes I get emotional over fonts." We can only hope Miss Kardashian appreciates how good she really has it.
For more on the Kanye West Twitter embroidery, head to NPR.

Plenty of embroidery patterns and projects on sale at Embroidery Online.