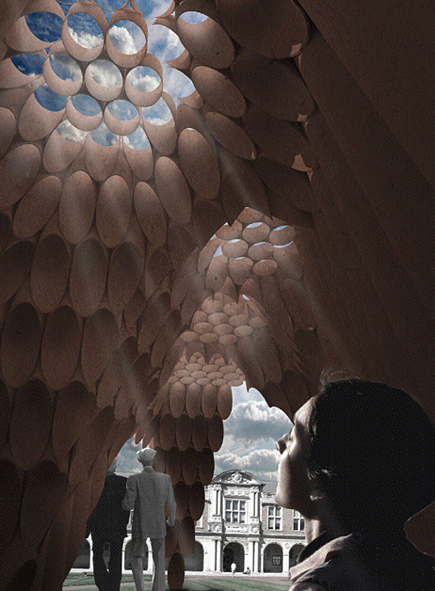 Right about now, many folks are wondering "What is Sukkot?" To celebrate the Jewish holiday (which extends from Oct. 12 to Oct. 19), participants build a small hut (aka sukkot) that commemorates the harvest and the 40 years Jews spent wandering in the desert. The sukkah (sukkah is the plural for sukkot) are inspired by the temporary shelters Jews used to rest in during their nomadic trek across the desert as well as the similar structures they employed when harvesting the fields.

Rarely are these sukkah much more than wood beams hammered together with walls adorned by the fruits of the harvest. Nor are they known for their interior decor. The term "Midwestern prairie grass" isn't often mentioned by builders. However, Sukkah City STL tweaks tradition. Inspired by a 2010 New York-based project of the same name, Rabbi Andy Kastner and architectural lecturer Brian Newman raised $7,500 on Kickstarter to launch a design competition in search of sukkah that addressed topics such as boundaries, humanity and religion using natural materials, like Midwestern grass.

The sukkah will appear on the campus of Washington University in St. Louis from Oct. 18 to 22. We picked out a few highlights below. 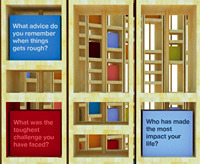 Storycubes: Act3 teamed up with Trivers Architecture and STL Beacon to create a sukkot that implores users to remember and retell life lessons and personal anecdotes, emphasizing the day's focus on historic journeys. 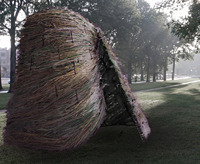 Gleaned: Christina Yogiaman, Forrest Fulton and Ken Tracy's sukkot, "Gleaned," fastens harvested grasses of the midwestern prairie to a plywood frame to fashion a cylinder that focuses the user's attention on the sky. 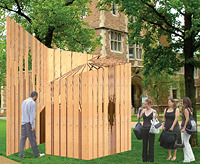 Heliotrope: Bronwyn Charlton and Linda Levin worked together on a design riffing off of the early heliotrope animation devices, suggesting congregants use light and dark and the heavens to recall and reanimate their past.