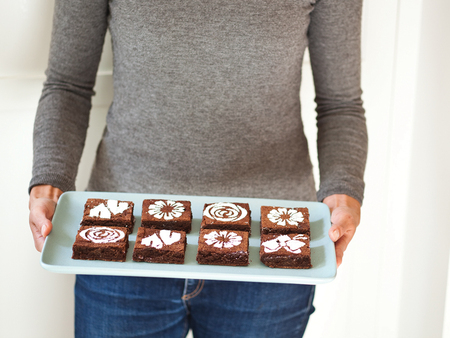 You’ll be surprised at how easy it is to create homemade food stencils simply by covering cardstock with clear adhesive paper, trimming out the motifs, and dusting powdered sugar over the stencils onto brownies. The resulting crisp white hearts and flowers will dazzle you and your guests. Keep stencils handy to transform brownies into magical treats for birthdays and holidays. Materials: Any color cardstock (master stencils): 12" x 12" (305 x 305mm) square 1 batch brownies, baked and cooled completely Confectioner’s sugar Fine wire mesh sieve Clear/transparent adhesive paper, such as Con-tact Paper Metal ruler Craft knife, such as X-ACTO knife Blades for craft knife, such as X-ACTO #11 blades 2B pencil

Note: Sugar designs show up best on the bottom of the brownies, so it’s essential to create a foil sling to lift brownies out of the pan neatly. Before pouring brownie batter into a 13" x 9" (330 x 230mm) pan, firmly press an 18" (470mm)-long piece of foil lengthwise across the pan, allowing the excess foil to come up the sides. Next, press and overlap two 14" (355mm)-long foil pieces perpendicular to the 18" (470mm)-foil piece, allowing the extra foil to come up the sides. Spray with non-stick baking spray. Bake brownies and allow them to cool in the pan for at least an hour. Use the sling to lift the entire brownie cake out of the pan and let it cool again for at least half an hour before flipping and cutting.

Bake your favorite recipe for chocolate brownies in a foil sling and remove them from the pan when completely cool. 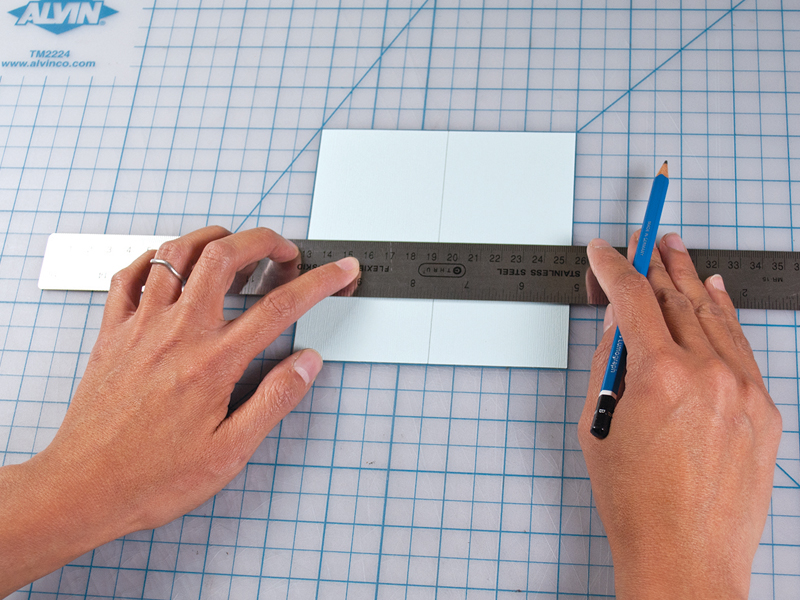 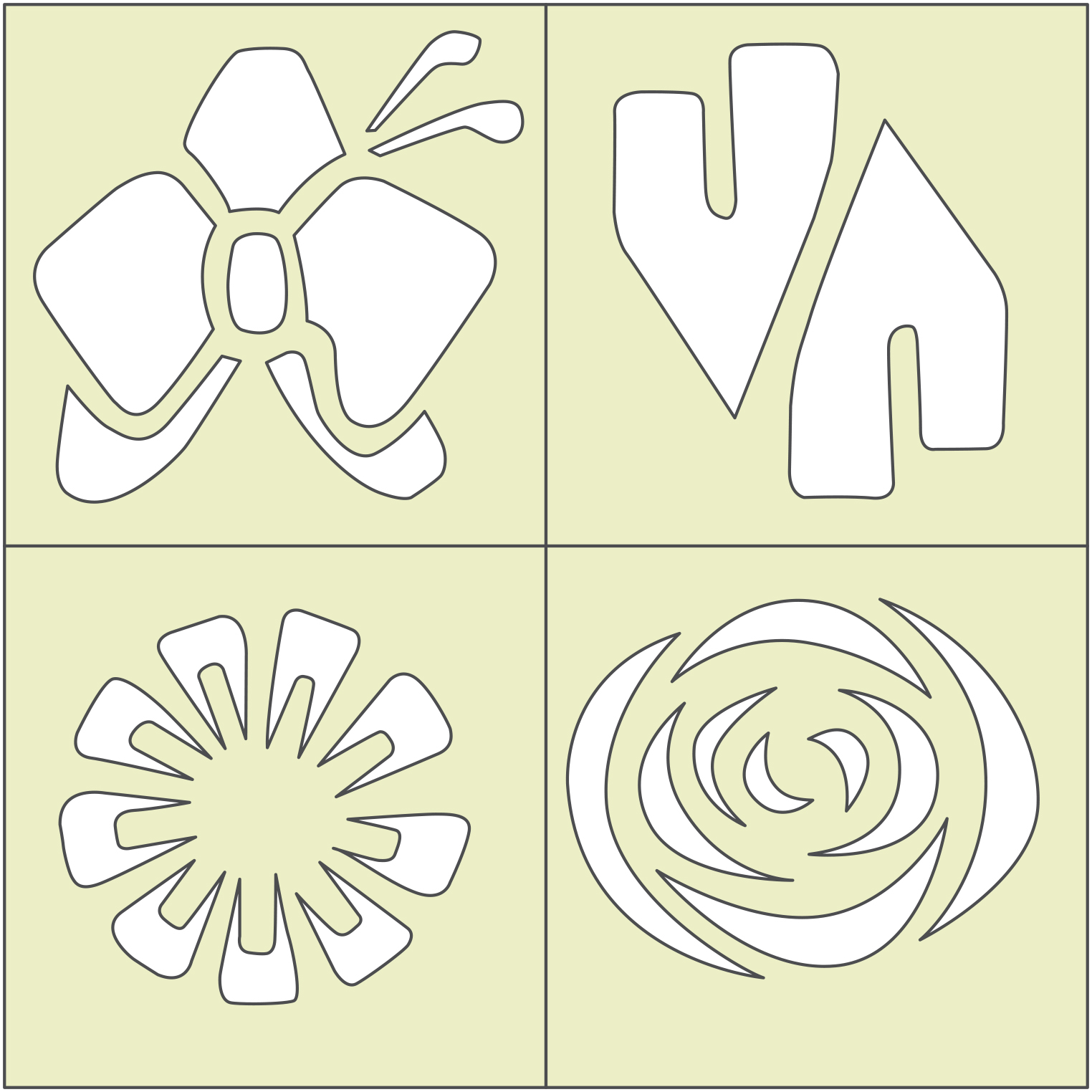 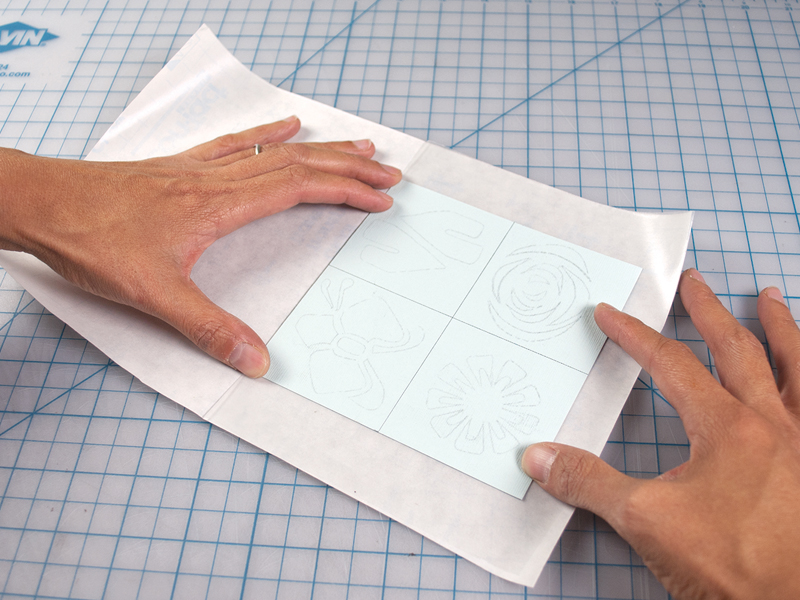 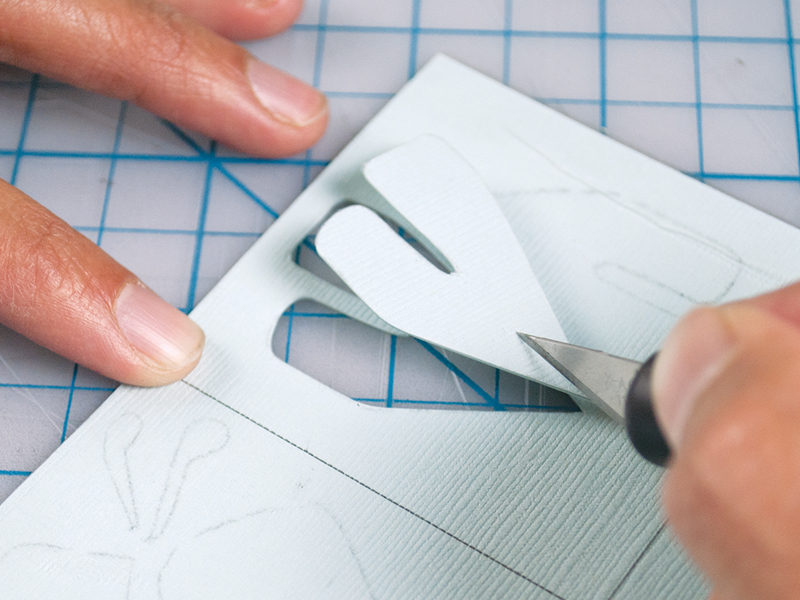 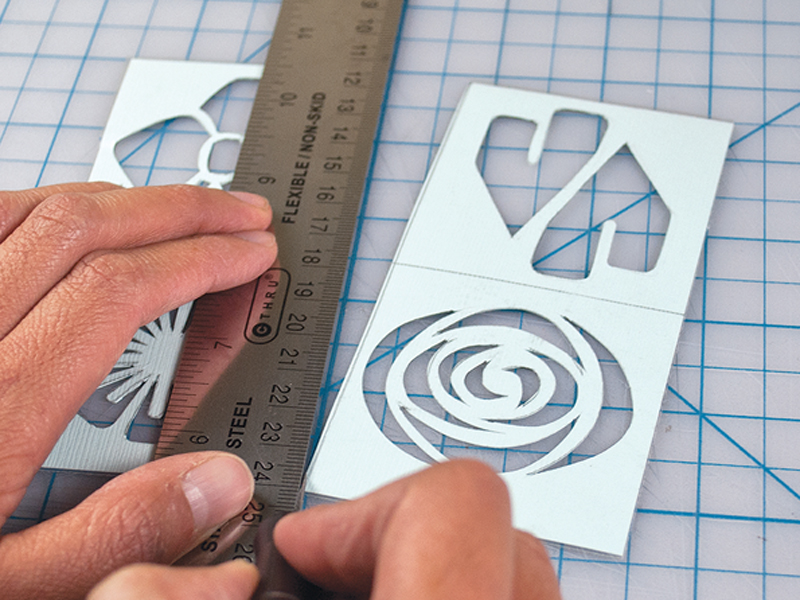 Trim to separate the four individual stencils. Cut the stencil grid along the straight lines so that it renders 4 separate 2 1/2" x 2 1/2" (65mm) stencil squares. Flip the entire cooled brownie cake onto a cutting board such that the cake bottom is facing up. Peel away the foil sling and use a chef’s knife to lightly mark the cake every 2 1/2" (65mm) across and 2 1/2" (65mm) down. Cut as many brownies as possible (you should have about 12–14). 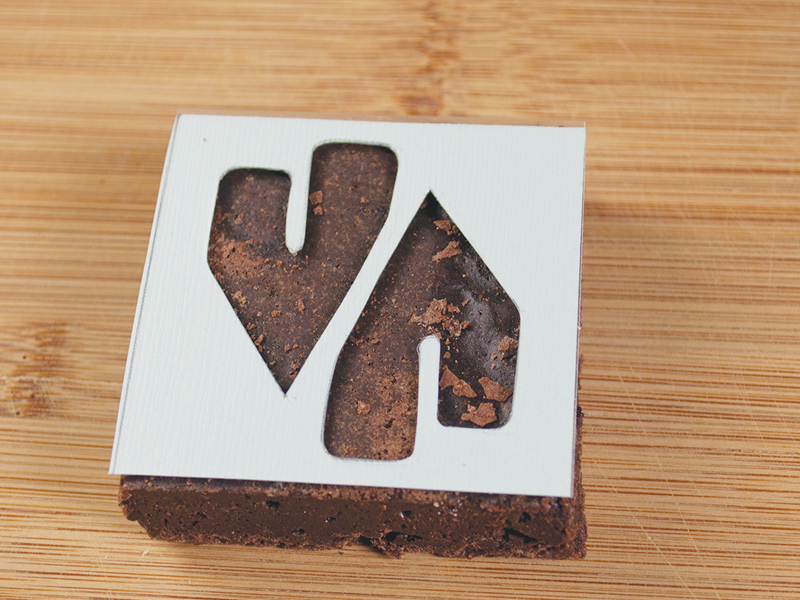 Decorate the brownies. Pour 1/4 cup powdered sugar into a sieve and give a practice shake onto a plate. Place a single brownie onto the plate with one of the stencils resting atop it. Lightly dust the sugar so that it fills the shape of the motif. With two fingertips, carefully lift the stencil off the brownie. Clean the sugar off both stencil and plate each time you decorate. 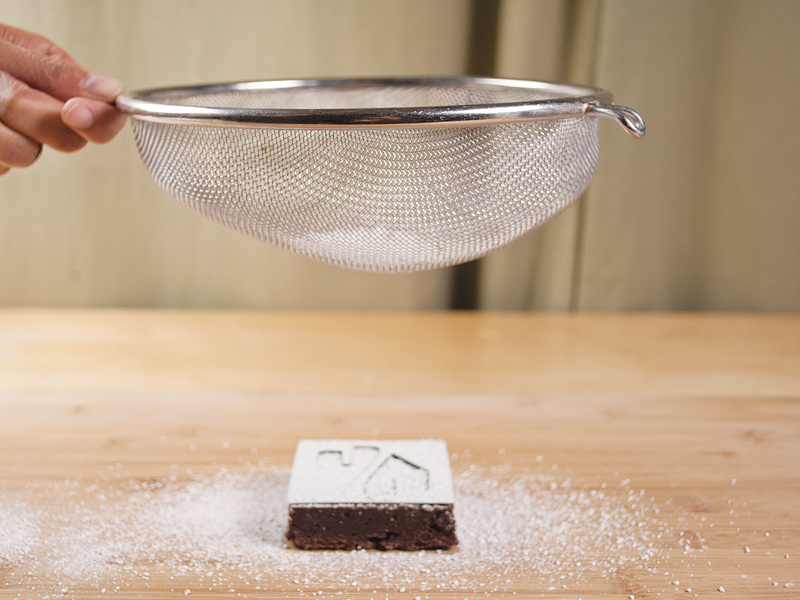 Shake the sugar lightly just so it fills in the stencil cutouts. If you shake too much, the sugar will pile up and slide downward after your remove the stencil, creating blurry rather than crisp silhouettes. Also, use a very steady hand when lifting off the stencil to avoid excess sugar falling on your brownie and muddying the motif. Optional: Creating a Multi-Window Stencil For larger quantities of brownies, create a grid of stencils to speed the decorating process. Draw a grid of 12 stencil squares (4 across x 3 down). Repeat the motifs of your choice to fill all 12 squares. Cut enough contact paper to cover the cardstock plus a 1" (25mm) border that extends beyond the stencil. Cut the motifs out of the grid, but leave the rectangle whole rather than dividing it into individual stencils. Place the stencil over the entire un-cut brownie cake, shake the sugar over the entire sheet, and cut the brownie squares. Stenciling Numbers or Letters For birthdays or other celebrations, consider creating stencils of letters or numbers that spell the celebrant’s name or age. Arrange the squares into the message and the flower and heart motifs around it. 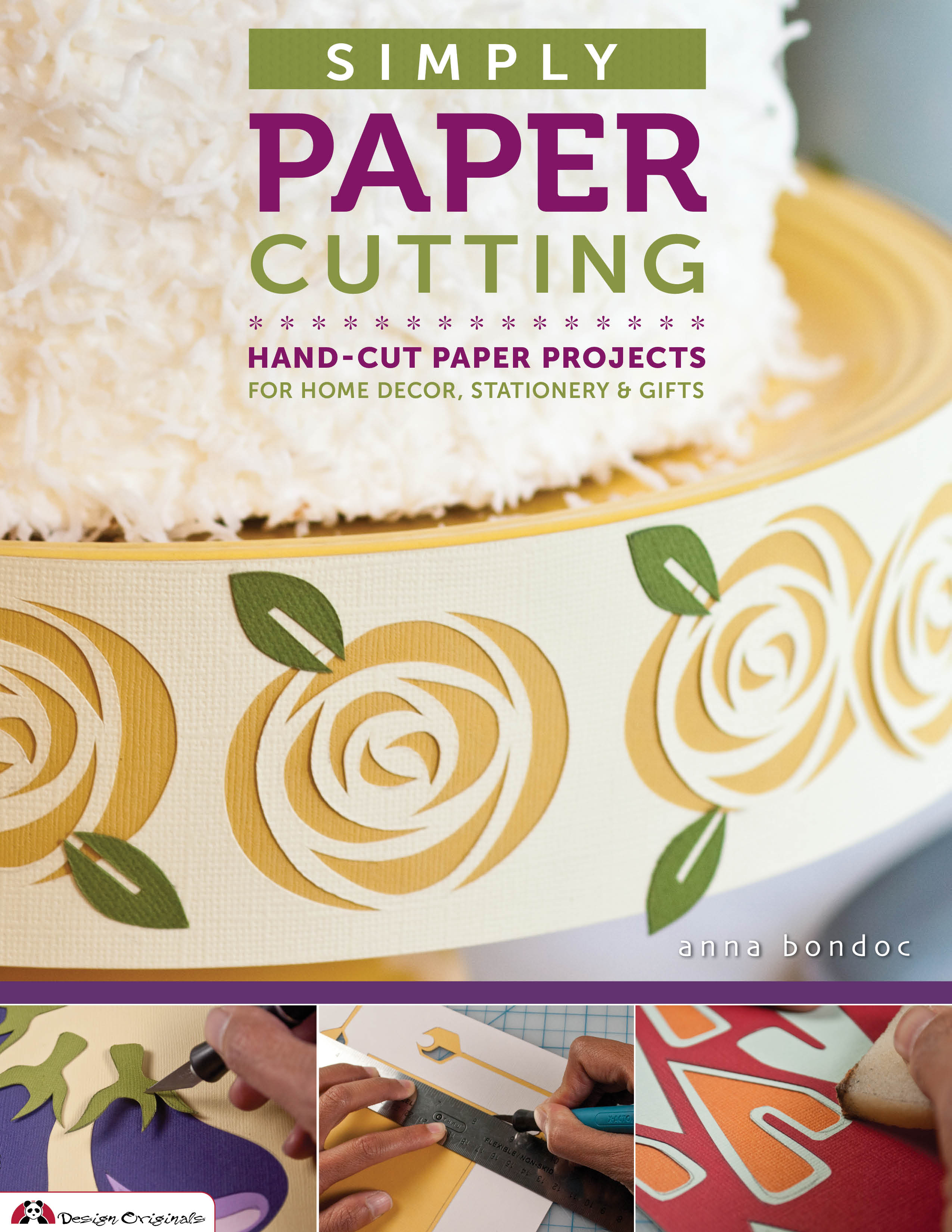 This how-to is excerpted with permission from <a href="http://www.d-originals.com/simply-paper-cutting-699">"Simply Paper Cutting: Hand-Cut Paper Projects for Home Décor, Stationery & Gifts"</a> by Anna Bondoc, published by Design Originals.