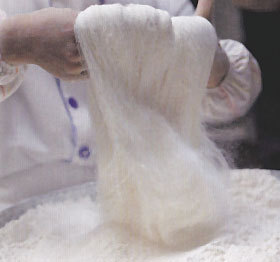 Also known as Chinese cotton candy, according to legend dragon's bread candy was invented about 2000 years ago for the emperor himself. It looks like a soft, thin beard--hence its name--as it is composed of very fine threads of sugar. The preparation process is fascinating, so vendors usually make it at their stalls in the street. Adapted from "Street Food: A Culinary Journey through the Streets of the World" by Carla Diamanti, published by HF Ullmann Publishers. Ingredients: 1/2 cup sugar 1/3 cup corn syrup (or glucose syrup) 1/3 cup chopped peanuts glutinous rice flour 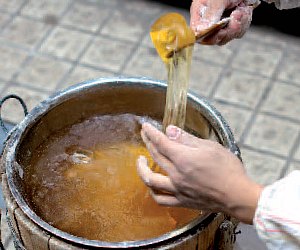 Boil the sugar and corn syrup for about 5 minutes. Cool to room temperature.

Repeatedly pull and fold the mixture (it should look have an elastic consistency) in order to increase the number of sugar strands that are being formed. To keep them from sticking together, constantly sprinkle them with gultinous rice flour.

Cut the 'beard' into small pieces and dredge them in chopped peanuts. Serve and eat immediately.