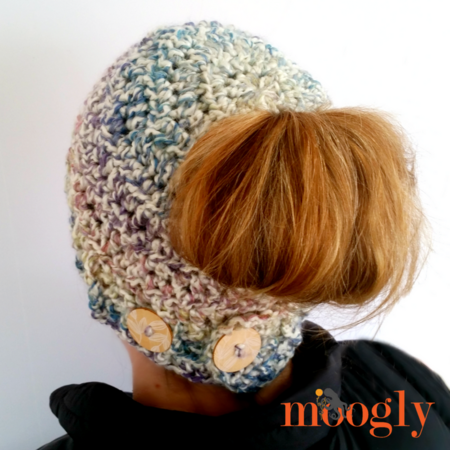 The “messy bun” hat has taken the crochet world by storm, and for the last few weeks the requests for a Moogly version have been pouring in. Well, you know I had to add my own spin to it - and that’s the Pick Your Pony Beanie!

Why the weird name? Well, it’s a ponytail hat/messy bun hat that doesn’t require your ponytail to stay put! You get to decide where your bun or ponytail is on your head - this hat works with every style. Even side ponytails (hey, everything comes around again… right?)!

The opening in the Pick Your Pony Beanie is made by working the hat in increasing rows, rather than rounds. With two buttons on the brim, you can adjust this hat to fit every hairstyle, and the thick ribbing keeps your noggin and ears warm and cozy. And it’s just about as easy as can be, in two sizes to fit just about anyone old enough to have hair!