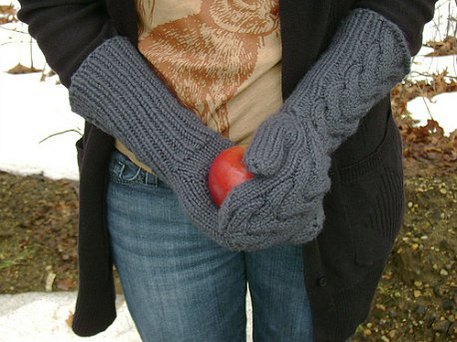 A few years ago, Stephenie Meyer had a dream about an average girl and a beautiful vampire talking in a meadow. From this dream grew the fantastically popular "Twilight" series, and a crew of devoted Twihards split between Team Edward and Team Jacob. But could she have ever envisioned an Edward Cullen crochet portrait or a bevy of "Twilight" cakes?
The fourth installment of the "Twilight" saga, "Breaking Dawn Part 1," comes out this week and to celebrate the premiere, we've compiled some "Twilight"-inspired crafts.
What are you doing (or making) for "Twilight"?

Bella's Knit Gloves
Need something to awkwardly fumble around with while being rescued from a head-on collision in the high-school parking lot? These knit gloves give that exact hint of "tasty morsel" that every vamp-ophile is looking for.
Get the free Twilight-inspired knit glove pattern from Subliminal Rabbit.

Crochet Edward Portrait Blanket
Who wouldn't want this living dead to snuggle up with at night? Even if you're not a crochet pro, you can still admire Tracy's skill and Edward's glow.
For the crochet "Twilight" tutorial, visit Tracy's Crochet and Other Things.

'Twilight' Saga Cakes
Each of these custom cakes was inspired by a cover from the "Twilight" saga. So whether you're Team Edward or Team Jacob, there's plenty to go around!
Check out more custom cakes by Nicole Morris Cakes!

Bella's Silver Moonstone Ring
Ever picture marrying Edward Cullen? Hate to break it to you, but he's not real. In any case, you can still shoot for Robert Pattinson! And here's a moonstone ring inspired by the one Edward uses to propose to Bella.
See more custom jewelry at StartupSterling's etsy shop.

Jacob's Dreamcatcher
In "New Moon" Jacob gives Bella a special dreamcatcher for her 18th birthday. You can replicate his dreamcatcher with a seashell, shark's tooth and wolf charm, or customize it with your own charms for a unique gift!
See the full tutorial at Twilight Family.

Glittery Glycerin Soap
Jealous of Edward's pasty yet sparkly complexion? Then get yourself some glittery soap! Note: best results when basking in sunlight.
Pro tip: Pair it with this Beyonce-esque metallic dress, and you'll be the sparkliest of them all at that New Year's party.
See more handmade soaps and candles at LeeAnn's Heaven Scent Creations on Etsy.

Twilight Coffee Sleeve
You'll probably need some caffeine if you're staying up late to catch the Thursday-night premiere of "Breaking Dawn." So why not deck out your coffee cup with this "Twilight" coffee sleeve?
To make your own coffee sleeve, visit MyFairKatie.

Edward Onesie
We assume that this is what the newest Cullen will be wearing when she makes her first appearance in "Breaking Dawn Part II."
Learn how to personalize a onesie from Kaboose!

'Twilight' Paper Card
Ever wanted your vampires cute and chubby? Black ribbon and a flocked velvet background add gothic styling to an impishly sweet Bella and an Edward more reminiscent of James Dean than Nosferatu.
Learn more about this "Twilight" card from Rosemary's Creations!

Under Cover of Midnight Hooded Cowl
If the November temps are getting to you, try making this vampire-inspired knit cowl. It'll keep your neck protected from all kinds of bites, from the chilly air's to any lurking vampire's.
Learn how to make your own cowl with a tutorial from "Vampire Knits"!