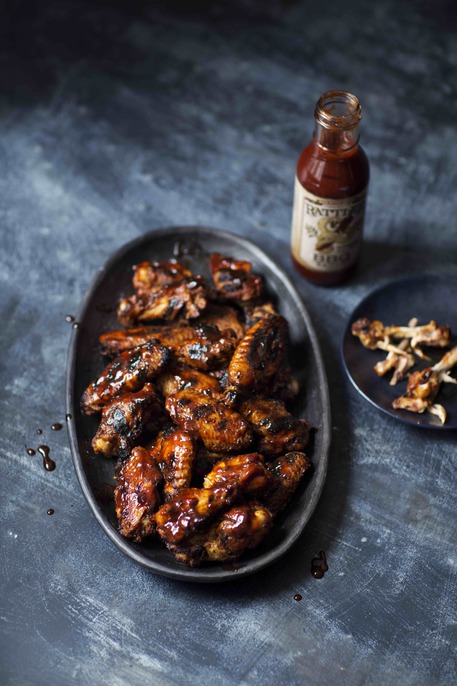 Chris Santos, Stanton Social chef and "Chopped" judge, takes hot wings very seriously. In his cookbook "Share," he says he orders them every time he sees them on a menu, which probably amounts to eating a lot of mediocre chicken. His recipe for "Smoky Rubbed Chicken Wings" is available on CraftFoxes (just follow this link) and includes quite a few ingredients (bourbon, ginger, mustard and more) and several different cooking methods, including roasting and broiling. This recipe is are a lot more interesting than your typical Buffalo Wing prep.

Stanton Social's wings marinate in a dry rub for 24 hours (the rub is included in the "Smoky Rubbed Chicken Wings" recipe, the chicken is then grilled, roasted and flash fired. For the home version, Santos adjusts the preparation so the chicken wings are finished with broiling. Either way, the flavor will be earthy and complex. The recipe also calls for Santos' Rattler Barbecue sauce (which has raisins, coffee and honey in it), but you can substitute most other commercial barbecue sauces.

Food Wishes' "Crispy Honey Sriracha Chicken Wings" are quite a bit simpler than Stanton Social's, but still a nice departure from the typical Buffalo wing. In addition to the Sriracha sauce and honey, the main ingredients include paprika, rice vinegar and sesame oil. Unlike many wings, these are baked instead of fried, but take almost an hour to finish, so be sure to prepare.

The chef in this video recipe for Ethiopian wings will be tough to understand unless you know Amharic (Ethiopia's official language). However, the captions explain most of what you need to know. The adventurous cook will definitely be interested to use ingredients such as Mimita (a spice mix that includes African bird's eye chili peppers) and kibe. Plus there's chili butter!

Inspired by a dish at Buffalo Wild Wings, the team from Healthy Junk Food try to recreate the Zesty Mountain Dew Wings dish at home by just experimenting and tasting. The duo gets started knowing there's honey mustard and crushed red pepper in recipe, as well as Mountain Dew. The results are surprisingly close, whether they're healthy depends on your definition of the term.

On her last trip to Korea, Maanchi realized that honey butter flavoring was popular on chips, chicken and plenty of other dishes. So she decided to create her own version of the trendy dish, and the resulting video has racked up over a million views on Youtube — pretty impressive. In addition to honey and butter, there's also soy sauce, brown sugar and optional pumpkin seeds.

While not particularly spicy, this Coca-Cola chicken wings recipe is close to as simple as they get. The glaze ingredients are Coke, soy sauce and a little bit of salt. Plus the preparation is only pan frying. The resulting flavor is sweet and salty, so it can be a nice alternative for anyone who doesn't like spicy dishes.

Does peanut butter, cayenne, soy sauce and lime sound like a good flavor combo for your chicken wings? OK, definitely not the most obvious marinade. However, the flavor of this Food Network recipe by Canadian chef Roger Mooking is very good, according to Michah, host of Grilling and Smoking. Be warned: Peanut Butter wings are a bit messy, but definitely worth a try, and not too spicy.

The most unusual ingredient in Caribbean is the Green seasoning mix, which includes cilantro, thyme and onions and can be bought pre-made. The other elements of the marinade will be found in most kitchens: ketchup, cayenne, lime and brown sugar. After deep frying for 15 minutes on each side, the result is crispy and spicy sweet.