A Chainmaille Designer Made a Wedding Dress Out of 100,000 Rings 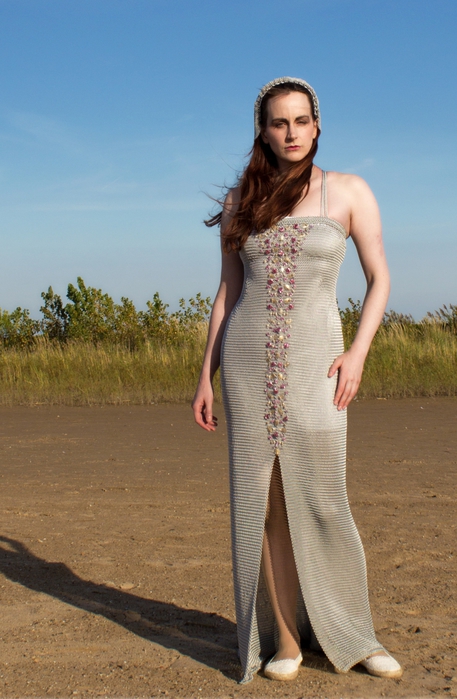 Pin It
Vanessa Walilko first started making beaded jewelry when when was eight. Her interest in chainmaille armor didn't appear until she was in college and she had no idea how to create it. So she started making beadmaille, weaving interlocking beads together until they looked like interlocking rings. With the help of a little internet research and a local art center, she learned the medieval techniques needed to fashion chainmaille.
Now one of Walilko's most impressive pieces — a wedding gown made from 100,000 rings — has become a finalist in The Craftys awards. We learned a bit about her inspiration and dedication.
What inspired you to make such a complex piece as a wedding dress with 100,000 rings?
It started out innocently enough. I was having brunch with a couple friends when one of them asked if I ever thought about making a chainmaille wedding dress. Immediately, a vision for the piece flashed into my mind, and I knew I had to make it. I was looking for a new challenge that was bigger than other pieces that I'd made before and this dress fit the bill. Over the next couple years, I found spare moments to piece together all the rings for the dress and the veil. It took over 350 hours just to assemble the piece, but many other countless hours designing and taking apart something I didn't like to start over again.
Is it difficult to shape chainmaille to the wearer's body?
Yes, but I've been sewing clothes since I was in high school, so it's easier for me to see how a piece of chainmaille should follow the contours of the body. I learned to make darts in the chainmaille "fabric" so that I can work with something more than just flat sheets. The trick with chainmaille is understanding how a particular weave moves. Larger rings have more space to move around, so you have to be more careful about how it drapes. Smaller rings might not move as much, so they're better for pieces that need more structure. What are the ancient armor techniques you use and where did you learn them? The ancient armor technique is chainmaille, and I learned a little bit on my own, and a lot at a local art center. Chainmaille has existed since the third century B.C.E., originally used for armor by the ancient Celts. Most people are more familiar with medieval chainmaille armor. In fact, the weave used to make medieval armor as well as my wedding dress is called European 4-in-1. For medieval armor, each ring was riveted together to maintain durability in battle, and was made of steel. For my pieces, I don't rivet the rings, and I also prefer to use anodized aluminum for colorful, lightweight pieces, turning ancient armor into modern wearable art.
Are there any challenges to wearing a chainmaille dress?
The only real challenge can be the weight. Even when I'm working with aluminum, if I'm using a lot of rings for a project the weight can add up. The wedding dress is 100,000 rings, and it weighs about 11 pounds. To make it easier to wear, I made the center section tight around the waist so it acts like a corset. That way, most of the weight is carried on the hips, and it's surprisingly easy to wear.
Would you consider the dress jewelry or clothing?
It's something in between. Chainmaille has been used to make armor and jewelry for over 2,000 years and it's typically something that straddles the line between decorative protection and functional art. I would like for my piece to be considered in this history of straddling both mediums.
What kind of reactions do you get when you wear chainmaille clothing?
I typically save my chainmaille clothing for special occasions. I love getting reactions from people who don't expect to see metal clothing, or from people who think I'm wearing a regular sweater and then notice that it's made from anodized aluminum. People usually get really excited and immediately want to touch the material.
The Jewelry category of The Craftys is sponsored by Darice.