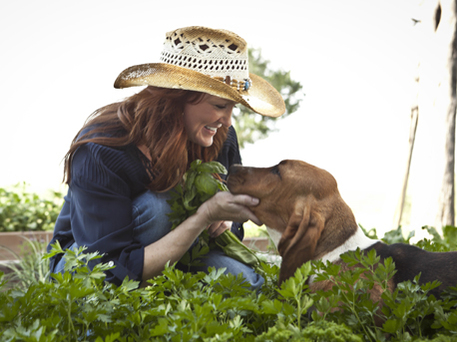 Prior to moving out on a ranch in Oklahoma with her husband, "Marlboro Man” (it’s a nickname, he doesn’t actually smoke), Ree Drummond lived in L.A., worked in marketing, got regularly scheduled manicures and rarely cooked. She would’ve scoffed if you told her what her future held: A quiet life on a cattle farm, homeschooling her four children and prepping hearty country-sized meals for her family — all while building an empire.

Since starting her blog, “The Pioneer Woman,” that documents this transition, Ree's come out with a bestselling book, “From Black Heels to Tractor Wheels: A Love Story” and cookbook “The Pioneer Woman Cooks.” (Get a couple of excerpted recipes at the end of this post.) And now, Ree anticipates her anything-but-average cooking show on The Food Network, airing this Saturday. We chatted with the “accidental country girl" to get the dish on her new show. 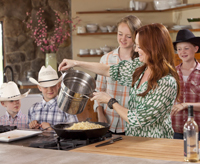 CraftFoxes: Hi there, Ree. So, your new cooking show on the Food Network, “The Pioneer Woman,” is about to air! Are you super excited? How does it feel?
Ree Drummond: I’ve likened shooting the show to childbirth, so now I’m ready for the fun part. I get to sit back and watch the show, and have seen the edits and the clips — it’s a new adventure!

CF: How is “The Pioneer Woman” going to stand out from the other cooking shows on the Food Network?
RD: When I first started thinking about doing a cooking show, I didn’t think it’d be a good fit for me, just standing behind a counter and cooking for the camera. I didn’t know what I’d bring to the table that would be different. Plus, I couldn’t leave the ranch to film it. Then the Food Network talked about coming out to our home to film, and it turned into more of a lifestyle show about how food fits into our lives on the ranch. It’s not just about me — it’s about my husband, my kids, our dogs, cattle and horses. I think it’s an accurate peek into our lives. But it’s no reality show!

CF: What’s an unexpected challenge of hosting a cooking show?
RD: Since the show incorporated our daily lives, my husband and kids’ involvement ended up being the biggest challenge. It just required a lot of coordination! At the same time we were filming the show, it ended up being the busiest time on the ranch for raising cattle. There was a two-week period where we’d have 18-hour days. But it was a learning curve, and if we film a second season, we’d definitely know how to be better organized. In the end, it was rewarding and also very creatively challenging. 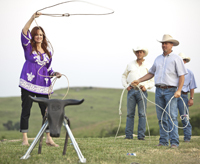 CF: Did being on camera come naturally to you, or was that something you had to learn as well?
RD: When I came out with my cookbook I was on all the morning shows: "The Today Show," "Good Morning America" ... so I had the chance to get comfortable in front of the camera. I thought I was home free until I realized during filming that it was just me and the camera — there were no co-hosts. I had to interact with the camera, and ask it questions. I cracked up a lot during the first couple of days of shooting. It definitely got easier with time, though.

CF: On your blog you’ve chronicled your transition from the city to the country. How has your perception of cooking changed from Los Angeles to Oklahoma?
RD: I was a vegetarian when I lived in L.A. … really. And since it was just me by myself, I’d eat whatever I wanted, whenever I wanted. I made lots of vegetarian pastas at 10 p.m. Then I met my husband, he cooked me a steak, and it was all over for me. And now since I’m cooking for a cattle rancher and four children, I’m not just cooking to dine, but to refuel my family. There’s heartiness to each meal, and a feeling of abundance. There’s also a whole lot of butter — an unapologetic amount of butter.

CF: What’s your favorite recipe that you’ll be showing us on “Pioneer Woman”?
RD: This is hard. There are so many! But one of my favorite things was homemade macaroni ‘n’ cheese I made for my son’s seventh birthday. I’ve always loved mac ‘n’ cheese, but for this version there was a toppings bar with caramelized onions, crumbled Gorgonzola and peppered bacon. We also had sliders you could use the toppings with, too. But again, there’s so much other good stuff: Chicken fried steak, mashed potatoes and gravy — just a whole lot of comfort food.

CF: That sounds sooo good. You’re making me hungry! Okay, final question for you: You’ve been living on the ranch for about 15 years now. If 16 years ago, the L.A. version of you got a glimpse of your future — the blog, the cookbook, and now a cooking show — what would she think?
RD: She’d think “bull” (laughs). But seriously, when I married my husband, I certainly didn’t think I’d have a cookbook, let alone a cooking show. It’s kind of a fun testament that you never really know where life’s going to take you. You just have to hold on and see where it goes.

Well said. Thank you, Ree Drummond! And we’ll be tuning in at 11:30 am PT/ET, this Saturday, August 27th, to catch “The Pioneer Woman” on The Food Network!

Cook up a couple of "Pioneer Woman" Ree Drummond's hearty recipes: Learn how to make meatloaf and chicken spaghetti.