Australian Crafts You Probably Don't Know (and a Couple You Do) 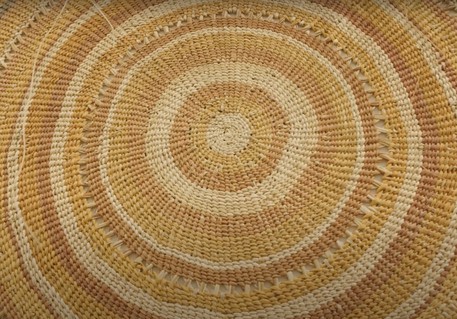 While Aboriginal rock art dates back at least 20,000 years, international study of the creative culture is only about 40 years old. That doesn't mean the work isn't important, but many art historians left research of it to archaeologists.

Before Aboriginals had a written language, visual depictions of topography and hunting grounds were vital for survival. Drawing was an integral part of daily life. Creative styles vary from region to region, and include the Melanesian culture of the Torres Strait Islands. There’s a lot more creative work being made than just hand-carved boomerangs and didgeridoos, although those traditions are both important to the genre.
After many centuries of viewing Aboriginal craft as a quaint hobby, the Australian government has taken to studying the market. Not only are native works growing in value, a lot of counterfeits are also peddled in it. As with many crafts, the utilitarian qualities of projects like baskets and floor mats often overshadow the artistic inspiration. Here's a handful of native Australian you probably don’t know -- and a couple you do.
If you're a fan of Australian hobbies, you may want to check out the best online casino in Australia.
Mats, Baskets and Dolls
Artisans from all over Australia weave reeds and grasses to make baskets, mats, skirts and other objects. In eastern Australian, wetland grasses like spiny-mat rush are fabricated into traps and waterproof shelters. Northern Australian settlers turn Pandanus leaves and kurrajong into dilli bags and armbands. Lawyer vine is transformed into food baskets in North Queensland. Torres Strait natives transform coconut leaf into fishing nets.
Tightly twined baskets lined with resin can be used to carry honey or water. Some are strong enough to be kept under water for days so that  gentle current will leach the toxins out of seeds, making them edible. Other baskets are flexible enough to fold into your palm yet durable enough to last for years.
Immigrant missionaries impacted the creative process for many artisans in the Australian outback. These Westerners convinced the aboriginals to weave flat mats instead of canonical ones, figuring flat pieces would be more popular with customers for wall hangings and table runners. The loose fringe that had traditionally been left on many mats as decoration were woven tight for a cleaner tabletop appearance.
Reed Necklace
Yenbena Marrinbidja demonstrates how peel apart and harvest the inner leaves in bulrush plants to make the strings used in an Aboriginal reed necklace. To make string, the reed is twisted, folded, pinched and pulled tight. To create “beads,” other reeds are cut apart into one-inch hollow sections. These reed beads (for lack of a better description) and then threaded onto the string to complete the necklace. Yenbena uses an open flame to singe the stray fibers from the string. The final necklace can be a meter long and used as a keepsake gift between friends.
Boomerang
Making a boomerang begins with finding the right curve on a tree branch or root. The better the curve, the easier it will be to shape into a successful tool.
Many kids who grew up playing with boomerangs may only know them as a Frisbee-like toy that flies back to you when you throw it properly. Aboriginals didn’t think of these wooden implements as toys, but as tools to scare birds out of trees and into nets. Inside Australia, another kinds of boomerang is also common: the hunting one.
While the returner has a curve in the middle and even length legs sticking out from it, the hunting boomerang is shaped like a small hockey stick, with a curve and one leg that’s longer than the other. Instead of returning, it’s designed to stop a small animal.
Both kinds of boomerangs are carved with aerodynamics in mind. Shaping the leading and trailing edges of the “wings” with 45 degree angles helps to create a lift when the wood flies through the air. After making major cuts with an axe, the boomerang is smoothed out with a sandstone. Then the wood is hardened with repeated soaking and heating, so it won’t break after hitting the ground numerous times.
Didgeridoo
The first artisans who work on a didgeridoo are termites. A craftsperson making one of the traditional wood instruments hunts for a tree that’s been hollowed out by the wood-gnawing insects. It makes the job a lot easier. Tuning the instrument also begins early in the process. The longer the trunk, the lower the key. Once harvested, a craftsperson strips the bark with a machete. Holes are plugged with bush wax or beeswax to keep the sound strong. The wax is also applied to the mouth of the instrument. Remnants leftover from termites are cleaned out of the interior. Let the staining and decorating begin!
Rate this post 0.0 rating Report post