Craft as Anti-depressant: The Authors of ‘Craftfulness' Explain How Crafting Helps Keep You Sane 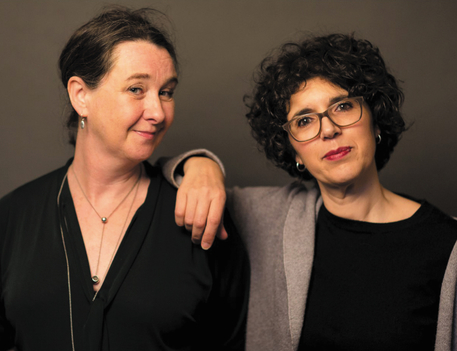 Few people would argue that life in the early 1900s was tougher than it is now. The Great Depression decimated savings, basic conveniences we now take for granted — like refrigerators — were scarce, and more people worked manual labor. Yet the incidences of depression are many times higher now.

Granted, these days people are more open about their mental health, yet the authors of “Craftfulness: Mend Yourself by Making Things” see another possible reason for the mental resilience people enjoyed in the early 20th century: creating by hand naturally makes you happy. And people were much more like to create things back then, whether growing acres of corn or darning a sock hem. There’s a good amount of scientific research to support that touchy-feely claim.
In “Craftfulness,” authors Rosemary Davidson and Arzu Tahsin alternate between high-minded and hands-on approaches to crafting. Both lifelong artisans, they mix research about artistic flow with personal anecdotes and also details several crafts to help inspire a bit of creativity in the reader. CraftFoxes asked Davidson and Tahsin about why they decided to mix science, art and craft together in "Craftfulness.”

Most craft books don't focus on the scientific research around creativity. What interested you in taking that approach?

Rosemary Davidson and Arzu Tahsin: The science in the book is very accessible as neither of us are academics! From an early age, we felt the benefits of regular craft activities. We noticed that in times of stress, shutting ourselves away to quietly work on projects seemed to make a positive impact on mood. We discussed the idea over the years, this compulsion to use our hands to make things, and, naturally, wanted to find out more about the possible connection between making things and well-being. There is so much evidence out there that losing yourself in the process of creation is good for you.
In the book you discuss creativity as being an anti-depressant. Which research about the topic do you find most compelling?
Behavioral scientist Kelly Lambert, author of “Lifting Depression” was interested in the impact contemporary lifestyle has on mental health. Given that our grandparents’ lives were tougher, why is the incidence of depression 10 times higher for people born in the latter part of the 20th century?
Lambert’s research asked if our mental health suffered when we swapped ploughing fields for trawling the internet. Her experiments show that physical labor influences well-being. Effort-driven reward is an evolutionary tool to ensure the survival of the species. Physical work brings not only a sense of emotional well-being when we see the positive results of our efforts, but also makes us feel more in control of our surroundings and ultimately helps us to build resilience to mental illness, such as depression.
When the effort-driven reward circuit is activated in our brains, the greater our sense of well-being and the more positive we feel. When we use both body (the hands) and mind, we enjoy a fuller brain experience than in purely intellectual-driven reward, and this helps prepare us for life’s next challenge.
Of course throwing a pot or weaving on a loom is no longer necessary for the survival of the species, but given that the brain’s neural pathways behave in the same way whether we are churning butter or performing intricate heart surgery, the important point is that the effort-driven reward system is stimulated in the same way. Lambert argues convincingly that this process is important for our mental health, because making things makes us feel effective. Using our hands to think about a problem, such as cleaning, mending, cooking, knitting or gardening, where the end goal is meaningful, is like taking a mental health vitamin, Lambert concludes. Any useful task that engages your hands gives you a sense of control over your environment and is, ultimately, very empowering. Craftwork brings exactly the same brain rewards.
Now that you've studied how to optimize the flow state, do you adapt your habits to it? What habits do you think are important for a creator to keep in mind to optimize flow?
We’re both keenly aware of certain conditions essential to optimizing flow. The main one we would agree is that the time we have allocated to a crafting session remains sacred. If you have children demanding your attention as bind your book or throw your pot, the session isn’t going to last very long! You have to be selfish about these periods and let everyone know you’ll be gone for a while. We have found we’re altogether more pleasant to be around after a crafting session!
What are some of the biggest challenges you've found to making time for crafts?
Time is our most rare resource. As busy freelance editors we have it challenging to carve out the time to craft, but given that we feel a craft practice is an essential part of managing a hectic workload we both try to prioritize pockets of time where we can withdraw and make with abandon. This involves occasionally sacrificing a Netflix binge and forgoing social media! But if you have a deadline then you have to meet it, regardless; what motivates us in this instance is the carrot of a long crafting session when we’re done.
You write that creativity is more important now than ever before. Why?
Sadly, mental health issues and anxiety about the state of the world are increasing. The sense of powerlessness seems particularly acute at the moment, especially amongst the younger generation who are struggling to find a role in society. We’re not saying craft will be a cure-all, but the confidence, sense of achievement and well-being that follow from being craftful, helps.

For more about the connection between mind and craft, read "Craftfulness."
Rate this post 0.0 rating Report post