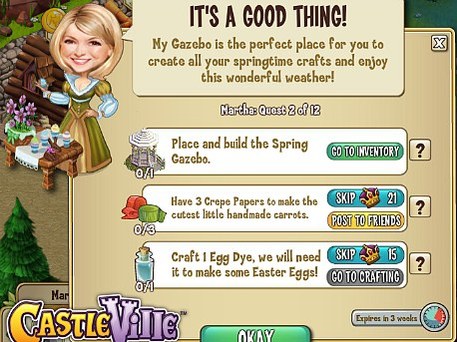 Martha Stewart and President Obama: Leaders, Icons and Now, Time-Wasters
MStew joined CastleVille this week, proving that even intimidatingly overproductive maker mavens need chill time. President Obama also got crafty with his time-wasting by joining Pinterest Tuesday. Having only pinned, so far, blah posts about his health care bill, we expect to see "inspirational" diet pictures soon enough.
Games.com has more on Martha Stewart's online fantasy world while The Boston Globe has the inside take on Obama's growing Pinterest addiction.

Methinks She Doth Protest Too Much
Crafters are mailing knit uteri, crochet crotches and other no-longer privates to protest what they see as male politicians' increasingly negative stance against women's reproductive rights.
For more on how protestors are using crafting to aid their dissent (or even for a free protest vag knitting pattern), head to HappyPlace.

All's Fair in Craft and War
Tori Spelling announced this week that her new reality competition "Craft Wars" will premiere on TLC this June. As both host and producer, Spelling will pit ordinary crafters against each other while serving as their mentor.
Would you watch this show? Head to The Huffington Post to decide.

Get Your Fair Share
Skillshare, a new website connecting novice teachers with people excited to learn but limited by time or money, is great for getting a handle on a new skill and even better for those interested in amping up their craft game by teaching.
Find out more about Skillshare by heading on over to the Los Angeles Times.