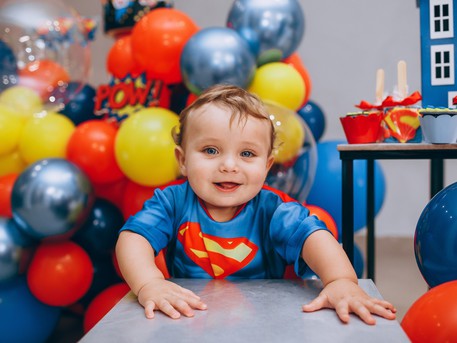 Kids' birthday parties are probably more complicated and expensive than the ones you remember from your formative years. Gone are the low-key affairs, where "planning" meant picking up an ice cream cake and candles, singing happy birthday and having everyone play in the backyard.

If you want to impress the current crop of wee ones, you may need to drop three or four figures, and rent out a play center with bouncy houses and performers. Add a theme on top of the other expectations — with a custom-made cake — and your eyes will be spinning faster than a centrifuge.
So, how do you DIY a themed-birthday party, either to make the event more personal or cost effective? The prep requires an investment, either in time, money or trips to the dollar store. Below you’ll find interesting ideas you can adapt to variety of themed parties. Some call for a hot glue gun; others just need a good printer. You probably don't want to make everything, so, be kind to yourself and buy a few themed items here and there. Don’t forget the love, you’ll need it between the sighs.

Any unicorn party is likely to be filled with rainbows, glitter and horns. Tiffani Beaston also adds tacos because they’re a favorite meal for her daughter. Pro tip: She uses a machine to inflate the pastel balloons for the balloon archway.

Unicorn horn treats are created by softening caramels, wrapping them around pretzel rods and dipping them in white chocolate. A die machine cuts out the pieces for small decorations like the happy birthday banner sign with paper tacos and unicorn cutouts. Cookies are cut in half for sweet taco treats with frosting for "meat" and green and yellow sprinkles for toppings. She doesn't make everything, though. She also purchases several unicorn party favors on Etsy. She also found a unicorn piñata for $10 at Aldi.

Not all store bought party favors need to be expensive. Many different dog-themed products can work for a malleable theme like Paw Patrol. Clueless Mama DIY picked up dog dishes for her child’s Paw Patrol birthday party because they were in the appropriate colors and had bones on them. Using a hot glue gun and a couple of tall shot glasses, she connected the bowls together and created a party tray tower.

Andrea (or Dre) has a strong nostalgia for her days playing Mario Kart. So when her daughter asked her for a theme party, she was excited to break out the hot glue gun for some crafty fun. She constructed piranha plants out of styrofoam balls, paint, paper mache and flower pots. The lips, teeth and leaves are molded with putty.

Dre tried to use a styrofoam cutter to make the mouth, with middling success. Cutting out the mouth can be a little messy and you may want to smooth things out with sandpaper. You probably don’t want to make all of the party favors. As Dre displays, plenty can be bought. You may want to check out a place like Who Wants 2 Party for Mario decorations. Dre picked up squishy stars and Mario-themed PEZ dispensers for her blowout.

In the Toy Story party video, also from Tiffani Beaston, you learn plenty of shortcuts for making themed cakes and cupcakes. For example, Tiffani Beaston turned standard cupcakes into Toy Story ones just by adding colored sprinkles in the appropriate combination. She bought blue pastel, pre-made fondant to cover her cake and then decorated it with figurines and printables.

Bluey may not be as big a show as Paw Patrol in the United States, but it’s quickly growing. Now on Disney Junior, the cartoon started as a coproduction between the Australian Broadcasting Company and BBC. Because it isn’t a huge property yet, a lot of the DIY approaches Whiskey & Whit came up with were quasi-original and can be applied to a lot of other themes. The official site Bluey.TV hosts a lot of free printables like cupcake toppers and banners. Whit also used images from the site to create her own cupcake toppers on Canva. If you want to be exacting, you can search for or buy the appropriate font.