Easy LED Projects That Will Impress Your Kids (VIDEO) 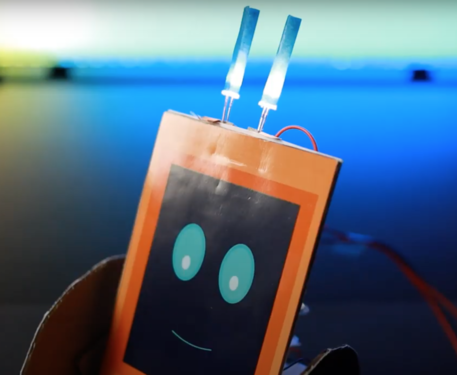 Decades ago, electronics seemed like a subject that only brainiacs cared about. Who else could comprehend what those micro-computer chips do? Yet in the digital era, understanding electronics is as vital as figuring out how your car works. Sooner or later, that information will be useful — and these days, most machines (including car engines) have a load of electronics on them.

Teaching kids about electronics can be fun. Generally, it makes sense to start with children who are six or older, but that age may vary, depending on the maturity and interest of the individual. Subscription companies like KiwiCo send boxes filled with fun, basic projects. Toys such as Snap Circuits update the building concepts of Lincoln Logs and LEGOs for the digital age. Still, you don’t need to buy a pre-made kit to start electronics instruction.
LED lights are great tools for teaching first-level electronics since they’re cheap and can demonstrate numerous concepts. Here are a few projects to get your electronics curriculum moving. Class is now in session.

How an LED Works

Since many of the projects below utilize LEDs (light emmiting diodes), why not start by explaining how an LED works? You can find these tiny lights in Christmas lights, car dashboards, and newer lightbulbs. They usually require less power to run than other lights, which makes them ideal for hobbyist projects. This fact may also be good to explain to your kids if you decide to replace your incandescent lights and fluorescent bulbs with LED tubes.

For electricity to flow around this simple circuit and light up an LED, two things are needed: positive voltage (+) and negative voltage (-). Diodes only allow the current to pass through in one direction. In a small LED, the positive leg or anode is longer and the negative leg or cathode is shorter. The above MakeCrate video explains more about the materials in LEDs and how they work.

This electronic dice project uses a breadboard as its base. These simple circuit platforms allow you to temporarily connect components together without solder and were originally developed to test electronics. These days they're also used for making simple projects. In addition to a handful of LED lights, the dice project also requires a 555 timer, a 4017 decade counter and a few other parts to build. The above video by Break Into Program explains the logic of a breadboard as well as how to build the dice project. Keep in mind, you’ll also need some tweezers and patience.

What kid wouldn’t want a programmable, remote controlled robot? Michael from “Volt, Paper, Scissors” explains how to make a cardboard robot that can solar powered. The project comes in a couple of parts, and it’s possible to make simple and programmable versions. Templates for the robot’s body can be downloaded as PDFs and printed. A couple of solar motors will need to be purchased for the wheels. Michael does a nice job of explaining how everything works in simple language.

Students who want to continue programming and making more electronic projects may want to invest in an Arduino board, which can be used to make a lot of open source electronic projects. Individually, the boards cost about $20, but it’s also possible, for $50, to purchase Arduino kits that come with parts you may need for numerous projects.

Arduino boards are built and modified with specific uses in mind such as gaming, music and lighting. Before buying an one for this project, make sure it’s well suited.
For this memory game, the Arduino board will drive the logic and a breadboard will be the platform for the LED lights and the buttons to activate them. A circuit diagram for the build can be downloaded. The video shows how each of the wires is connected, but it’s also helpful to have the instructions.
These ideas are just the start of beginner projects that can introduce kids to the world of electronics and programming. You can also research platform such as Raspberry Pi, which offer simple and complex projects for students of electronics.
Rate this post 0.0 rating Report post