Electrical Emergency: Can You DIY the Problem or Do You Need a Pro? (VIDEO) 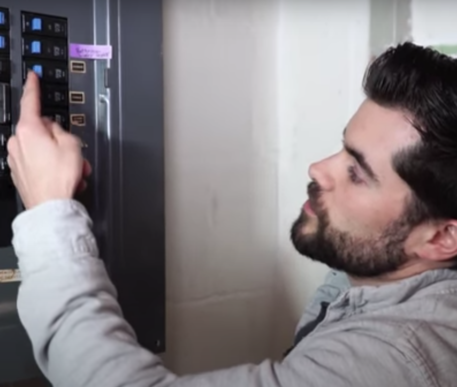 Electric emergencies can mysterious and unnerving. When the lights flicker off, the problem might be your whole town’s power grid or just your circuit breaker. Short circuits and overloads can burn wires or start fires. When these issues occur, you may not know if it’s safe for you to fix the issue or if you need to call a professional. Here are ways to address the most common electrical emergencies.

An electrical fire can start from a shorted out toaster, faulty outlet wiring, or numerous other possible issues. The first response should be to call the fire department. Even if you think you can control the fire, it never hurts to have backup.
The next step should be turning off the power source, probably at the circuit breaker box. If you’re not sure where the box is located, figure out now before a problem happens. To put out the fire, you’ll need a class c fire extinguisher, which is made for addressing the sparks that often accompany electrical fires. After the fire is finished, you may need he fire department or an electrician to review any issues in your home and fix the wiring that started the fire.

Is an appliance or light turning off for seemingly no reason? Circuit breakers are designed to “trip” or turn off when the circuit overloads. One common reason they turn off is plugging too many appliances into one outlet. When that happens, too much heat builds up in the circuit and causes an overload.
An electrical short can also happen when a wire is accidentally cut during construction or old connections fray. Breaker circuits regularly grow old and can’t carry the current they once did, so when they repeated turn off, they need to be replaced.
Some of these issues are easy to fix. If a circuit breaker trips, you can check if an outlet is overloaded and reduce the load on an outlet. You may also want to inspect the wires for fraying. If it’s unclear why the circuit is tripping, you may need to have an emergency electrician test the line.

If the power is out in your house, you probably need to call the electric company. Before you do, check a couple of things. Is the power out in your neighbors' houses? If so, it may be a large problem you’ll need to survive with candles for light and Sterno for cooking. If your house is the only one without power, check your electrical box to see if a circuit breaker has tripped or fuse has blown. You can re-set these things fairly easily, but if the problem persists, you’ll probably need to call in the electric company or an electrician.

If you have lights blinking on and off, first turn off the power to the light to minimize the possibility of an accident occurring. With safety gloves on, check the power cord and the writing in the light for frays or plays where a wire might be shorting. If everything looks okay, you may want to turn off the power to the circuit breaker box and then check the wiring in it (as shown in the video). If any of this sounds a little scary, definitely call in a professional to do the work.
Rate this post 0.0 rating Report post

Can You Repair Your Water Heater Yourself? CraftFoxes Staff | 03/27/22