How to Fold an Origami Love Letter — Video Tutorial 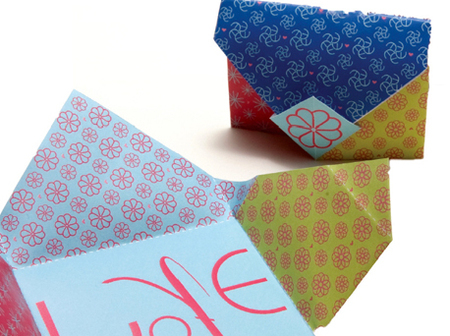 Want to learn a new word? An "ambigram" is a graphic that spells out a word as you would expect and also flips or rotates those same letters to suggest something new. Cindy Ng's origami love letter would be pretty cute even if it didn't have an ambigram in it. As part of her origami kit "Girligami," she created paper that turns "Love" around and makes it look like the word "Note." Pretty clever, eh?

While you don't have to have the paper from "Girligami" to make the note, it certainly adds to the secret message effect to have "Note" written on the outside and "Love" on the inside. After you watch Cindy explain how to fold the note, you can read the step by step instructions for making an origami love letter in CraftFoxes' how-to section.