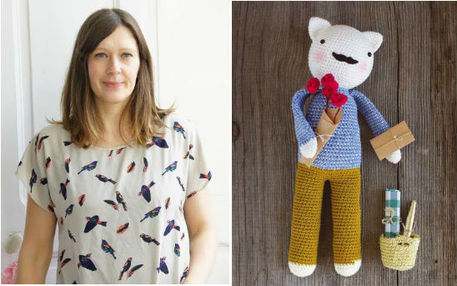 Smiling bears, shy puppies and mystified rabbits are all a part of the world Sandrine Deveze crochets onto the blog Tournicote... à cloche-pied. Scroll through her posts and you'll be transported to a French countryside where the stone fireplace warms you during dinner and the yarn mice hide in the pencil holder.

If this life seems irresistible and out of reach, consider that Sandrine taught herself how to crochet and after many years of endearing herself to readers with aww-inspiring original characters she's now releasing her first book "Sweet Crochet," which nicely summarizes the crocheted creatures on the pages inside.

CraftFoxes asked her how she got started as well as her inspiration.

Check out Sandrine's free pattern for a crocheted owl.

How did you teach yourself crochet and what were your early challenges?
I learned crochet by myself, with the help of books, internet sites, and especially YouTube videos. I spent entire evenings deciphering the subtleties of the many stitches and possibilities offered by crochet.

My biggest challenge at first was mastering working in the round. Starting a work in the round can be quite difficult for a beginner. Once the first two rounds are through, it’s pretty easy. After that step was mastered, I had to figure out how to re-create the designs I had in my mind. 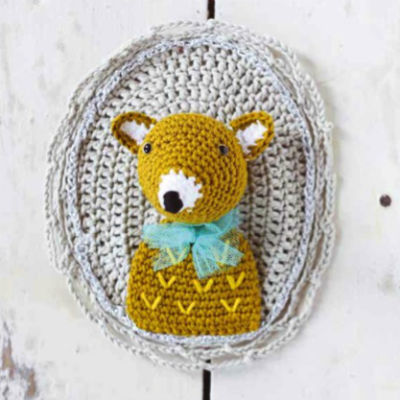 How did you develop your crochet style?
At the beginning, I always followed patterns. I waited until I learned the subtleties of crochet to create my own patterns. I don’t think I’ve developed a particular style. I had fun making creations without following an exact model. I create based on what I like, most often in soft pastel colors.

My three children are equally a major source of inspiration for me. They advise me frequently and are very interested in what I crochet, especially Louise, my youngest, nearly four. 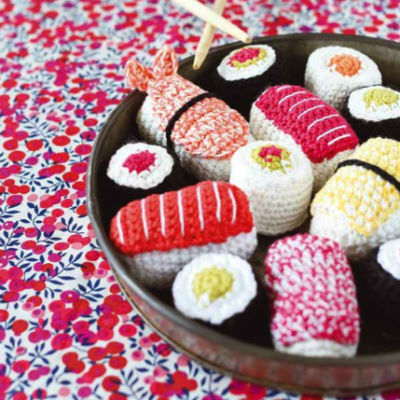 How was your crochet work influenced by amigurumi?
My first piece was a simple apple. I really wanted to make a toy dining set for my children. I then wanted to make something other than fruits, vegetables and cakes, and I discovered the world of amigurumi, which strongly influenced me going forward. I have fun with these characters.

The possibilities are infinite. Starting from a common base for a character, I have only to change the shape or position of the ears and the embroidery of the face to create a different personality. I am definitely inspired by the beautiful amigurumi that abounds on Pinterest and blogs.

Read more about Sandrine's life and enjoy her patterns in "Sweet Crochet."