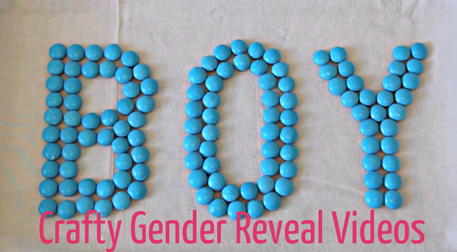 Having a fun gender reveal party can be a challenge. Keeping the baby's gender a secret until the appropriate time is the most important task of the day, but making sure people are interested and amused is also part of the fun. These videos offer some great ideas for gender party favors and crafts as well as suggestions for making a gender party video. You'll be amazed at how many people conflated Gangnam style with a gender party reveal. One is included below, but if you're a fan of that craze, you can track down many, many more.

While there are a lot of great gender reveal party ideas in Someday Mama's video, the fun starts when she swats away at the baseball-shaped pinata. It takes several swings to get things flying (and a little tearing help), but a pinata can be a fun way to make the reveal exciting. Fast forward to about 1:30 to get to the action.

Making a crafty box and filling it with gender-reveal balloons is a popular set-up for a baby shower. A decorated box can also be a nice conversation piece and opening it a fun event. Abby Smith of the TwistMePretty blog got her children involved to reveal the genders of her twins, having each of them open a box for one of the new babies.

If you really want to make the gender reveal a dramatic event, a treasure hunt is a fun approach. Scott and Camber attached clues around their backyard for their children, which eventually led them to cut into a a cake that answered the baby's gender. Unless you want to take a trip to the OB/GYN along with Scott and Camber, you'll probably want to fast forward the video to a few minutes in.

For those making a gender reveal video, Eric Miller's M&M approach is clean and effective. Simply spell out the baby's gender in M&Ms, pour plenty of M&Ms in different colors onto the reveal and then run the video backwards. This may be tough to pull off live, unless you're able to alter the space-time continuum.

Myka Stauffer's video includes several classic gender reveal crafts: cupcakes with blue and pink frosting, party favors with colored candies, glitter, Silly String and more. What makes the video clever is that all of these reveals are first shown in black and white and then replayed in color, extending the drama. It's a slight twist that may inspire some party and video ideas.

Creating a name reveal video in addition to a gender reveal video? Raising a Riley demonstrates how a little stop motion photography and some letter blocks can make for a fun piece.