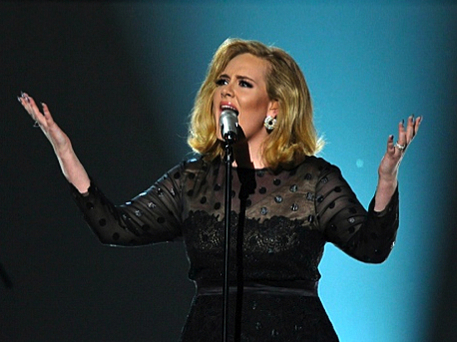 With the 2013 Grammys on Sunday night, we wanted to look back at last year's big winner and her understated yet vintage-style polka dots. Adele won 6 Grammys in 2012, including Record of the Year and Song of the Year, but her elegant meets retro style is so understated that you'd never know she stole the show. Not so for celebs from year's past, like Lady GaGa, M.I.A. and Nicki Minaj, with their outrageous Grammy outfits. 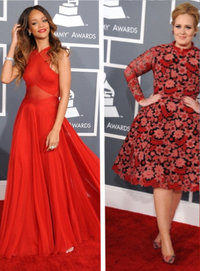 Getty
Rihanna (left) and Adele (right) showed off red looks on the 2013 Grammys red carpet. Adele's retro-chic floral dress is one of our favorites. Kimbra, winner of Record of the Year with Gotye for "Somebody That I Used to Know," made quite an entrance in her crafty tie-dye look. She later switched to a sheer and bedazzled gown to accept her award. Although we don't have a worst-dressed list for the 2013 Grammys, we love how Jennifer Lopez poked fun ("I got the memo...") at her plunged-neck 2012 Grammy outfit fail when she took the stage. Who did you think was the best and worst dressed of the 2013 Grammys?
For more coverage of the 2013 Grammys, best- and worst-dressed celebs and the big winners, check out EW.