How to Write Calligraphy with a Fountain Pen 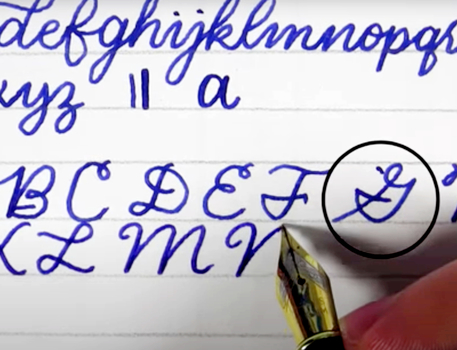 The calligraphy we now see on wedding invitations has its origins in both the east and west. Around 200 B.C., Chinese writers were primarily using brushes on paper to write. Writers in regions that are now a part of China used different characters and had distinct calligraphy styles. China's “modern” approach, still in use today (Kǎishū), didn’t become widespread until 300 A.D. or so.

Western calligraphy began in Phoeniecia circa 1,200 B.C. with approaches to ornate writing that were later spread by the Etruscans and popularized by Romans.
The fashionability of ornate handwriting ebbed and flowed over the centuries, eventually having a pop in the late 19th century when British craftsman Edward Johnston began teaching calligraphy lessons in London. His approach influenced 20th century designers such as Graily Hewitt from England’s Central School of Arts and Design.
Calligraphy’s rich and convoluted history helps explain why the most appropriate tool for the pastime varies with the style of script you’re planning to write. Gothic, Italic and Foundational calligraphy require a pen with a broad, flat nib. Styles such as Copperplate and Spencrian and can be done with a brush pen.

Then there’s the fountain pen, which a lot of people have, but don’t realize can be utilized for calligraphy — at least some styles of it. Fountain pens were introduced in the late 19th century as a more convenient alternative to quills. When it was invented, a huge plus was not only that ink was in the pen, but also that you could refill he pen and weren’t tied to a bottle of ink. Calligraphy writers need keep in mind that most of these pens have thin double nib tips.

Writing calligraphy with a fountain pen means understanding it’s capabilities and limitations. While the styles that require a wide tip, like Gothic, can’t be easily executed, there’s still plenty you can do. Before you start, get the right ink to refill your pen before it runs out.
In The Normal's explainer video on how to do calligraphy with a fountain pen, the host demonstrates how he changes the grip of the pen. He turns the nib 90 degrees to the left. This angle creates smaller lines when you write with standard pressure and thicker lines while applying pressure for the downward stroke. While writing, he uses a thin line for upstrokes and a thick one for downstrokes.
Commenters on The Normal’s calligraphy video mention several caveat’s about using a fountain pen to do calligraphy. For example, writing on the side of the nib can damage the tines. That may not be a big deal if your fountain pen has cheap, replaceable nibs, but owners of pens with expensive tips may want to be cautious. Some describe turning the pen as a “great way” to bend the tines or break the nib.
Other viewers write that they’re excited to try calligraphy. “I have been looking for a font that I love and I think I have just found it!” notes Linna.

To practice calligraphy, you’ll need to get comfortable with holding the pen to do upstrokes, downstrokes, and round strokes. Some sites have printable sheets you use to can trace the strokes and letters.

In her video about how to write calligraphy with any pen, Torryn Marie demonstrates more shapes calligraphy letters often use, including the overturn, underturn, compound curve and ovals. Repeatedly practicing these pen movements will help keep the letters uniform in your writing.
While watching Torryn’s video, take note of how she picks up the pen when writing letters. These movements help create the textures and look well known to calligraphy. About eight minutes into the video, she also gives tips on how to simulate the look of calligraphy with a fine tip pen — an approach that could also work with a fountain pen. In this section she draws the shape of calligraphy letters and then draws a second line where he thicker sections typically are. Finally she colors in those thicker sections with the pen. This approach might not work for a lot of lettering, but if you’re creating a one-off design it can definitely create a clean, polished look.
Choosing the right paper may reduce the amount of wear on a fountain pen’s tines and offer great result. The main issue calligrapher’s must worry about is bleed. When you hold down the pen to create thicker lines, the ink can swell on the paper, leaving a messy finish instead of an artful one.
If you’re going to get the best paper possible for calligraphy with a fountain pen, look for one that keeps the ink from oozing or running over the paper. Laser printer paper is a surprisingly affordable option, although not exactly the most glamorous, Plenty of other great options exist, some of them shinier than others.
Practice will make you better at calligraphy. It’s the best way to get better at it. You can find practice sheets online or in books. Start tracing the basic strokes and then move on to more difficult letters. Take your time and be patient.
Rate this post 0.0 rating Report post