How to Make Your Own Sewing Pattern 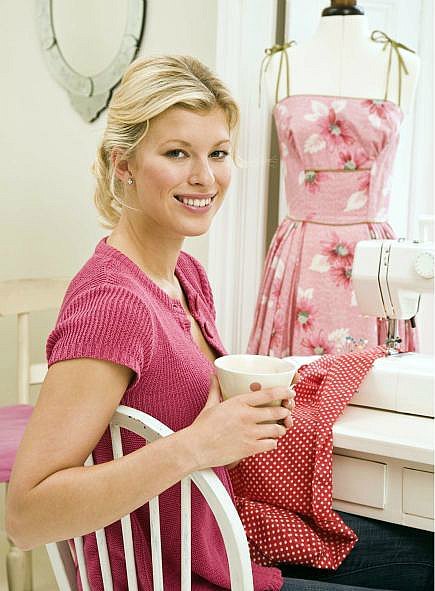 You may think you don't need to worry about patternmaking, or that it's too advanced for you. But once you know how to make and use a simple dress pattern, for instance, a world of sewing opportunities will open up to you.

If you are like me — employing more enthusiasm than grace when it comes to lunch — then you know the horrors of irreplaceable, food-ruined garments. Perhaps you found that perfect vintage dress; the fit is sleek, the style trendy — but the fabric, yeesh. Once you understand patternmaking, you can duplicate clothes without damaging the original. Patternmaker and "Patternmaking For A Perfect Fit" author Steffani Lincecum explains the rub-off method you can use to recreate great clothes.

“It's primitive, really,” says Lincecum. “This tracing method goes back to how patterns were first created.” To help you visualize the rub-off method more clearly, remember back to childhood when traced with your hand. Wobbly red lines of smudgy crayon (hopefully not on Gran's white couch as I was wont to do) are surprisingly similar to the rub-off method.

Rather than cutting the source garment apart, Lincecum recommends the rub-off method.

Preparing the Garment for Making a Pattern

“Generally, if you have static, three-dimensional items like a handbag (which would be difficult to lay on flat surface) you'll want fabric to drape over it,” says Lincecum. “But if you have something flexible like pants or a dress where you can lay it out and get an entire piece of the garment, paper is better.”

For example, if we want to duplicate a now mustard-disgraced A-line skirt, Lincecum says the first step is to cover a hard surface that can withstand pin pricks like a ceiling tile or cork with kraft paper. Next, start with the largest piece of the garment (typically the front piece) and fold the section — not the entire garment — in half. Push away wrinkles and pull the garment piece out to its full size. This is where most people mess up.

Pinning and Tracing the Source Garment

The next step, Lincecum adds, is to "pin straight down into the garment then through the paper and into the pinning surface." Continue to poke pins every few inches along the skirt's seam lines and into the paper, marking any other features like closures or darts. The result is a perforated trace-the-dots on the kraft paper below. Remove the garment, trace the lines in pencil and you will have your first pattern piece.

Patternmakers will continue this pinprick tracing for each of the garment's pieces. To add darts, closures or other features, simply measure the depth and length of each feature and then remember to add that measurement back in when tracing the pins onto the kraft paper.

Tracing a Complex Garment with the Rub-Off Method

Sounds easy, almost like it was just common sense, right? And it is. Lincecum says, “New sewers do the rub-off method intuitively, without realizing that professionals do, too. I'll see people come to a beginning sewing class, and they say, 'I didn't have a pattern, so I traced it.'”

Another difficulty for patternmaking via tracing arises when those new to sewing have to sew the traced pieces together but have put a blouse together before. “Without a pattern, [those new to sewing] don't have the instructions. But that's what 'Patternmaking For A Perfect Fit' is for—it gives a complete course on how to make a blouse. Readers don't have to figure it out on their own.”

Steffani Lincecum is the author of Patternmaking for a Perfect Fit, published by Watson-Guptil Publications.