Is it Oven Safe? How to Know if You Can Bake Glassware, Styrofoam, and Other Materials 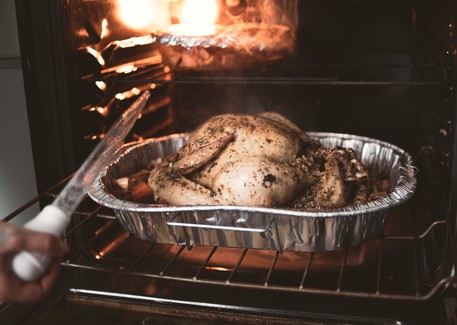 Figuring out which dishes are safe to put in the oven can be more complicated than it seems. Who hasn’t stared at a Styrofoam container of cold takeout food and thought “Ah, I’ll just throw it in the oven for a few minutes — what’s the big deal?”

Styrofoam isn't the only kitchen material that comes with question marks. You may have also seen stories about shattering glass dishes and toxic chemicals leaching out of non-stick surfaces. For those who want to be smart about what they bake in and on, here’s a list of common cooking materials along with their safety factors.
Styrofoam
Let’s get this out of way first. As convenient as it would be to bake and reheat styrofoam in ovens, do not. The material softens at 212 degrees Fahrenheit and melts at 464 F. Some Styrofoam has a mix of chemicals that make it safe to use in a microwave. If possible, check if the container is "microwave safe" before cooking in it. Most versions of the material shouldn’t be heated past 175 degrees F. The heat from the food can break down the styrofoam and hazardous chemicals in the material, like Styrene and Benzene, have the potential to be released and absorbed into the food.

Some bakers who are used working with glass casserole dishes may think that all versions of the clear, shiny material are oven safe. Don’t be fooled — as much as it might sound cool to make a soufflé in a highball glass, there’s a decent chance the container will crack or crumble.
The glass needs to be tempered. Pyrex, one of the most popular types of tempered glass bakeware in kitchens today dates back a little over 100 years. Around the turn of the 20th century, New York State's Corning Glass Works was manufacturing thermally resistant glass to be used in railroad signals. Apparently an employee brought a section of it home to use it as a cake mold and the innovation led to a huge industry.
One of the nice things about tempered glass bakeware is that it doesn’t react with any of the food ingredients, even acidic ones, to change the color or taste of the food like some metals do. It’s also stain resistant so the bakeware fall apart as years go by.
That doesn’t mean Pyrex or other tempered glass bakeware can’t break. A few years ago, videos bounced around the internet of baking dishes shattering. Yes, it is possible, particularly if you put a very hot glass dish on top of cold water. The shock can cause glass to splinter. While few people read the warnings on bakeware, they exist for a reason. Cracks occur in rare occasions, yet glass bakeware is generally safe.

In the past couple of decades, silicone bakeware has become more commonplace: Muffin pans, cookie sheet liners, and oven mitts are now made with silicone. Given the warnings around heating Styrofoam, it’s natural to think a rubbery material like silicone may also melt at a low temperature in the oven or leach toxins into your food.
However, the synthetic rubber in Silicone is much safer than styrofoam. The material can withstand temperatures up to 428 F and even higher for indirect heat. So, it’s safe for most baking recipes.
Cooks who want to avoid a lot of extra fat in the kitchen will appreciate the nonstick surface. Unlike muffin wrappers or parchment paper, bakeware made with the material is reusable. Keep in mind, though, silicone requires care. Dry it well before storing or it may lose sections of its surface color and become a little sticky.
Aluminum
While most kitchens these days usually have at least some aluminum cookware, the material isn’t without controversy. Highly acidic and salty foods react with the material, leaving a metallic taste in dishes such as tomato sauce and lemon curd. That reaction has also led to concerns about aluminum leaching into food.
Some of those concerns might be applicable if you’re roasting lemon chicken or cooking a lasagna in an aluminum pan. Few baked desserts have acidic ingredients, at least not ingredients that would likely interact with pan. Recipes like lemon bars and lemon meringue have acidic ingredients in the filling, but not touching the pan.
On the other hand, a pineapple upside cake in which the fruit rests directly on cooking surface may be a cause for concern. In general, baking items like cookies shouldn’t be a major concern. If the potential for leaching metal worries you, seek out anodized aluminum (which has been processed to be nonreactive) or avoid the material altogether.

The term "nonstick" covers a variety of different materials, most of which have a type of chemical coating. Nonstick may be more common in sauté pans, but many cooks also pan-fry fish or chicken for a few minutes on the stovetop and then finish cooking in the oven, turning these pieces into defacto roasting pans. While it’s hard to deny the usefulness of nonstick surfaces, they definitely raise eyebrows for some chemists. Before 2013, the compound perfluorooctanoic acid (PFOA) was used in the creation of teflon, which has been shown to cause liver problems and cancer. The newer formulation of teflon (without PFOA), has been proven safe up to 570 F. So, be mindful not to sauté or bake at temps that can cause the coating to break down.
Ceramic coating is a relatively new alternative to teflon, and generally safer and more eco-friendly, but can also scratch easily.
Taking all of those facts into account, which material should you use? Well, a lot of that comes down to personal preference. Given current research, glass, anodized aluminum and ceramic non-stick surfaces certainly make sense for baking. Silicone bakeware is also making great strides. Whatever you do, don't reheat the leftovers in Styrofoam.