Learn How to Sew with the Author of 'Sewing for Dummies' 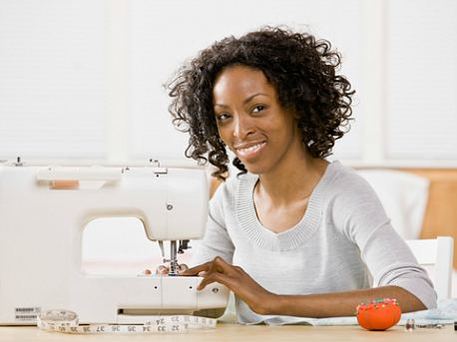 “I'm thrilled that there are new sewers. They're my favorite folks!” says Jan Saunders Maresh, author of Sewing for Dummies.

Maresh's book gives those new to sewing a starting place with common language definitions, practical insider tips and detailed how-tos. Read on for avoiding common beginner mistakes, what every Sewing Survival Kit needs and even ideas for your first sewing project.

For the New Sewer:

Common Reasons Why Most People Are Afraid to Sew

The machine: that's probably it more than anything, which is one of the reasons why I felt it was important to include all of the sewing machine settings in Sewing for Dummies. I wanted to have a strong focus on the machine, how to use it, how it works.

A lot of times beginner sewers might inherit a machine from their grandmother or buy one from Craigslist or a tag sale, but they don't know if it's in good shape. They're looking for a good price on a machine. But the problem is that you don't know what you're getting. You don't need a $1000 machine, but you do need one that works and is a pleasure to work with.

Common Stitch Mistakes and How to Fix Them

The most common mistake for beginner sewists, I believe, is choosing the wrong stitch length. When sewing nice straight seams, you want to make sure the fabric doesn't pucker because even if you iron or press later with a machine, sometimes you can't get the pucker out of the seam. My goal is that with all of the sewing that I've done since I was 7, I don't want someone coming up to me and saying, “Oh did you make that?” I didn't want it to look homemade.

If you use a stitch that's too long, what happens is that there isn't enough thread in that stitch to make your seam line lay flat, so a longer stitch requires less thread than a shorter stitch, which seems contrary. But if the fabric waves out of shape, then there's too much thread.

Common Sewing Mistakes and How to Avoid Them

I always say, have a love affair with your iron: it's really, really, really important to press and iron each seam. I describe the difference between the two in my book. Without pressing or ironing, the garment can just look very terrible and homemade looking.

Leaving sewing machine needles in too long is another mistake beginners make. You need fresh needles for each project because during the course of a project if you accidentally sew over a pin or a zipper you can burr the needle point [so much that] it's snagging fabric or skipping stitches."

It's really important to throw it away and change the needle. Once, there was a lady who came to one of my programs, and she said, “I don't know what is wrong with my machine, it won't sew at all.” I had her bring the machine to me the next day, and it turned out that she had worn the needle down to the eye!

It's important, I feel, when you hand sew to use a thimble. I surveyed sewing professionals, and the majority of pros use a thimble; it's more comfortable.

What should be in every sewing kit?

Obviously a tape measure, and some place to hold your pins like a pin cushion, a magnetic pin cushion, or a wrist cushion pin. The survival kit should also have scissors, the short 4” ones for fine clipping; bent handled shears, a thimble, a sewing gauge (6” ruler with sliding gauge), and a seam ripper.

I also have several things to mark the fabric, like water soluble (or water erasable) markers and invisible (or disappearing ink). You just have to be careful if you're doing marking on anything like quilts that last a long time. The ink will hurt the quilt over time.

The survival kit should also have really nice pins like 1 1/4” glass head. You want pins thin enough to pin fine fabric, are easy to grab, and are easy to find if they fall on the floor or you leave them in the fabric somewhere. I use glass head pins, which are also known as fine quilting pins. They are easiest to use, and if you're pressing or ironing, and leave them in they fabric, the glass head pins won't melt. The ones I use have a good white head, which makes them easy to find.

Hand sewing needles are needed for sewing on buttons and hand basting. I buy a variety pack that have fine and heavier needles and come in different lengths and thickness.

Reprinted with permission from Sewing for Dummies by Jan Saunders Maresh, published by Wiley Publishing.