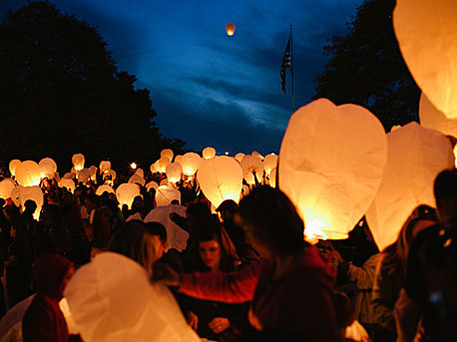 ArtPrize, an annual juried art and craft competition in Grand Rapids, Michigan, features surprising, striking and even scary installations and shows from artists around the nation. The winners, decided both by public vote and a small group of art experts, will be announced tonight, and those that are selected can expect to draw from over $500,000 in prize money. Dan Johnson and Mark Carpenter created one of our favorite entries, "Lights in the Night," now a Top 10 finalist, where a rumored 20,000 people launched lanterns over the Michigan town last Friday. A series of impressive images captured by Kelley Jordan depicts a blue-black night bright with the golden glow of lights and awed faces.
To learn more about this Midwest art competition and see other 2012 finalists, head to ArtPrize.