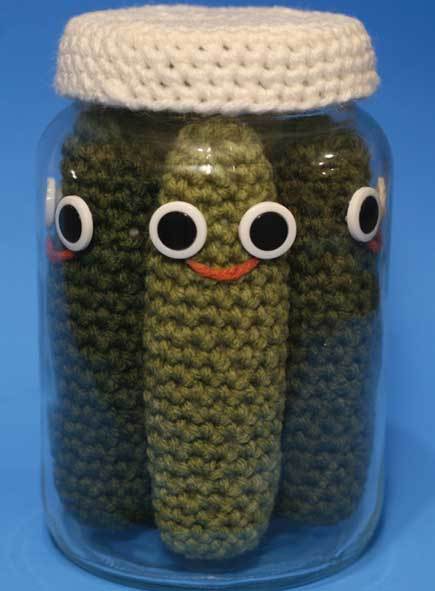 Fabric artist Nicole Gastonguay doesn't like to follow the rules. She crochets faces on mousetraps and Polaroid cameras and prefers guessing-and-testing her patterns rather than finding ones on the web. Where most crochet crafts are toys for the young, Gastonguay's pieces are for adults who never want to grow up, which may be one reason they're crowd favorites at the many galleries where she showcases her work.

When did these toys become art? Gastonguay realized her crochet pieces were something more than a hobby in May of 2008 when she had her first opening at the Tinlark Gallery in Hollywood. “[I was] sharing space with Saelee Oh. I'd always been a fan of Saelee's crafty, intricate paper cut work. I still can't believe I get to show my work in the company of so many amazing artists.”

Juxtapoz
Gastonguay's crochet quest began with a random stumble across Jessica Hutchison's whimsical work on Flickr. Hutchison, also known as Jess Hutch, inspired her. “Unfortunately,” Gastonguay says, “Jess knits her characters. I had tried to teach myself how to knit a few years earlier and I totally stunk at it. I was bad. So I thought I'd take a stab at crochet to see if it was any easier.”

Unsure where to begin, Gastonguay bought Crocheting for Dummies by Karen Manthey, Susan Brittain and Julie Holetz. She says, “My poor knitting skills proved that I was indeed the target audience for this book. I learned one stitch (single crochet) and looked online for patterns that only used that one stitch.”

The simple lessons in Crocheting for Dummies inspired Gastonguay to experiment with the rules. “I began to figure out what happened if you increased here, and then decreased there. It was mostly trial and error. A whole lot of error.” 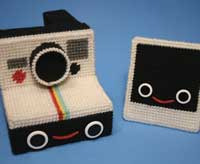 After Gastonguay learned the necessary crocheting techniques, she started attaching faces to replicas of food and everyday objects, anthropomorphizing Chinese take-out containers and matchstick boxes. Gastonguay explains: “For some reason, if I put a face on an everyday object, I find it absolutely hysterical. I'm going to keep doing that over and over until I don't find it funny anymore. That pretty much sums up my artist's statement right there.”

And why foods and household items? “There's just something about fake food. I'm obsessed with the plastic food on display at some Chinese restaurants. The kind where you point at what you want to eat.”

Sizing Real Objects for Crochet: Despite working without a pattern, her pieces are sized almost perfectly. With her needlepoint objects, Gastonguay usually draws things first on a grid in Adobe Illustrator. But her crocheted items are different, employing intuition over formula.

Material of choice: Acrylic yarn. “I'm sure it's terrible and scratchy for making a sweater, but it stitches up pretty stiffly and holds its shape better than any soft, natural fibers would.” She also appreciates plastic canvas, which helps her make her boxier pieces. “Straight crochet and stuffing can never give you that hard edge.”

Finding time: A typical Gastonguay day does “not have nearly enough yarn.” She works full-time during the day as the senior graphic designer at a children's and young adult book publisher in Manhattan. “Like other artists who do this kind of work,” Gastonguay says, “I have a full-time job during the day and then crochet/needlepoint in the evenings and on weekends.” With some variations, each piece needs about 30 hours to complete.

Gastonguay commits to this time, being fully present while working on her art — no TV in the background or other distractions — and tries to work a little bit every day. This focus and schedule is how she keeps her artwork fresh.

To see the work of more innovative crafters like Nicole Gastonguay, check out the book "Juxtapoz Handmade."

10 Tips for Reading Crochet Patterns and Instructions Laurie A. Wheeler | 02/01/22