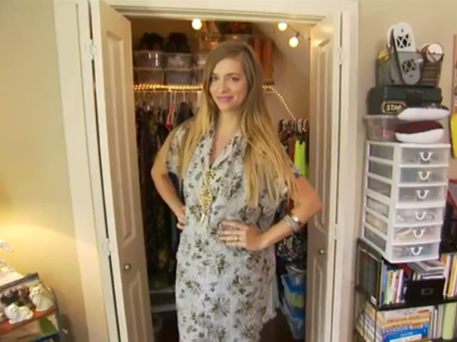 Did you watch the premiere of Project Runway Season 11 last week? Putting aside Heidi Klum's strange "bra dress," we were smitten with the talented fashion designers and this season's twist: the designers will work in two competing teams, rather than as individuals. If you missed this week's episode, watch the video below for a Project Runway episode one recap.

Amanda Valentine, Nashville-based designer and contestant on this season, shares her vintage-inspired clothing in this video. She even shares her own wedding dress, a design she made.

Take a sneak peek into Amanda's closet and then take a look at her clothing line, Valentine Valentine.

The winner of Project Runway's episode one challenge was Daniel Esquivel, 48, who designed a dramatic black pantsuit. Emily Pollard, 24, was sent home as the designer with the lowest score. Her architectural jacket, top and skirt was one of the most unfinished Runway outfits in the show's history, according to judge Nina Garcia. Heidi Klum commented that her 8-year-old daughter could have made that outfit.
Missed this week's episode? Take a look at the winning and losing look's of Project Runway season 11, episode 1, in the video recap from Lord & Taylor.