Build the DIY Backyard of your Dreams with Reclaimed Wood 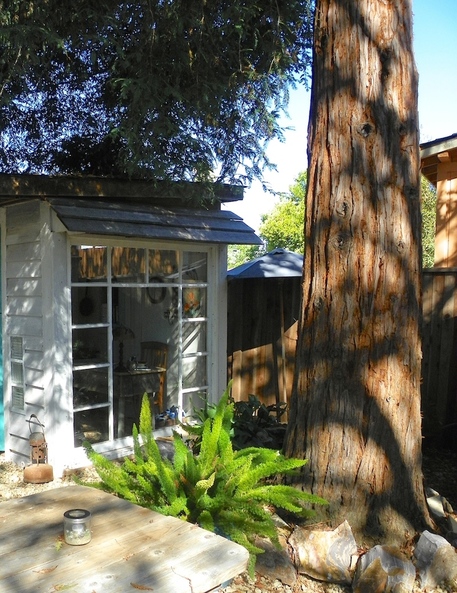 Under the shade of a giant redwood tree sits a quiet little writer's studio. Every square inch of this under 100 square-foot gem was constructed with reclaimed wood. My friend Terry lovingly built it in the backyard for her wife Zayne, who comes here to reflect, read and write. Terry is an avid Craigslist collector when it comes to cast-offs — her creative and practical reclaimed wood projects can be found all over their large backyard in Northern California. Take a little tour with me and you'll never look at an old fence post the same way again! 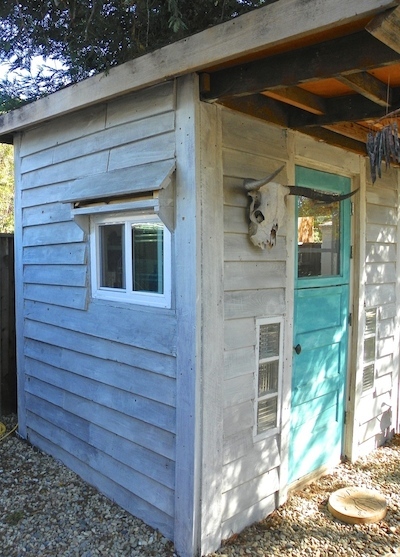 This sweet little studio was built from 100% reclaimed wood and cost only about $200 in materials — from the wood and the windows to the hardware and the paint. Each and every reclaimed plank, board and post has a story.
The framing came from a redwood play structure a father had built for his kids, who eventually grew out of it. The exterior siding is from Terry and Zayne's own fence that had to be replaced. The verticals on each corner came from a deck which the neighbors across the street had taken out.
The hardwood plywood sheets for the interior walls came from a tea importer — the sheets were used as barriers between each pallet of tea. The rafters are from a 100-year-old fence torn out of a historic property in a nearby town. The wood for the floor started life as part of an appliance display at Home Depot, then became a family's puppet stage before Terry got ahold of it. And the door was a freebie, as was much of the rest of the wood, from someone on Craigslist.

All the wood was painted with beautiful, all-natural goat's milk paint, made by hand at a goat dairy farm just a short drive away. 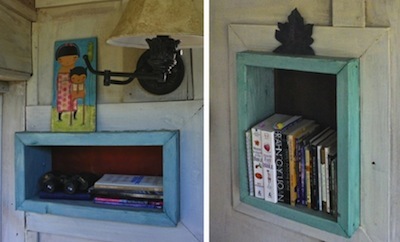 Terry designed several of these cute little book nooks with some of the leftover wood and tucked them into each corner of the studio. 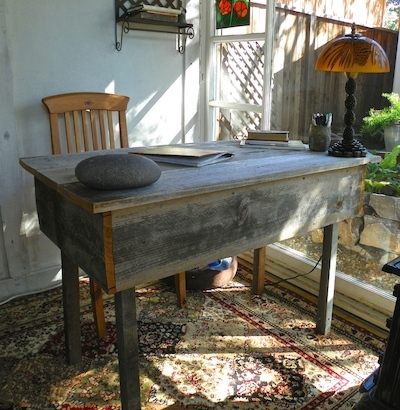 Zayne's gorgeous rustic desk was built with their old fencing — it has been sanded smooth and it's sturdy enough to dance on! Can you imagine sitting here in the peace and quiet, gazing out through the large recycled picture window, with a light breeze coming through the open dutch door, birds singing in the trees ... I bet you feel a poem coming on right about now, don't you?

In the warmer months, the shade of the redwood tree keeps the studio cool, plus it's wired for electricity when she needs a fan. When it gets cold, a small space heater or a few candles burning in the antique iron stove warms the little place right up. 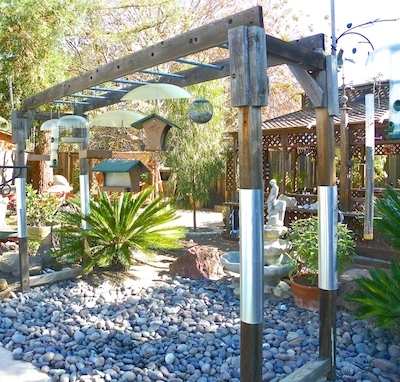 Across the yard from the studio is a large bird-feeding station that was also part of the children's redwood play structure. The guy had listed the structure for free on Craigslist to anyone who was willing to come over to dismantle it and haul it away. Of course Terry was first in line! She added metal flashing to each leg to prevent the squirrels from getting to the bird feeders. Terry studied bird science in college and she has identified more than a dozen different species of birds that come to this yard to dine. 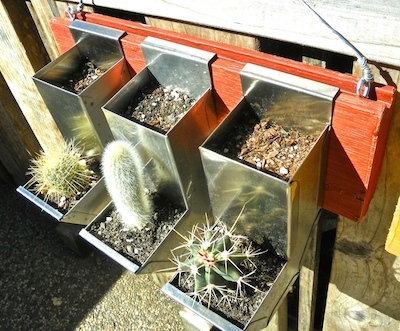 This is one of several cactus planters in the yard that makes creative use of the grooves of old wood floorboards from a nearby home that was being refurbished. Terry scored a big collection of these stainless steel rabbit feeders at a flea market and they hooked perfectly into the floorboards. 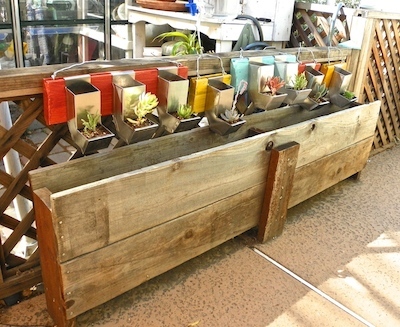 This reclaimed wood planter box was custom-built to be narrow and deep for specific plants with long roots. 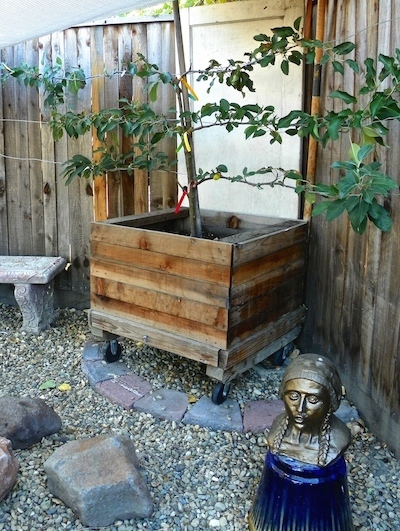 Terry built this extra-large planter from old pallets and she added wheels to make it easier to move around the yard until they decided what to plant in it. It now has a very happy permanent resident — an espalier fruit tree — and each branch has a different variety of apple.
I hope this little backyard tour has inspired you to think twice about what you throw away ... reclaimed wood not only saves you money, it saves trees, too!
All photos ©Lisa Fulmer