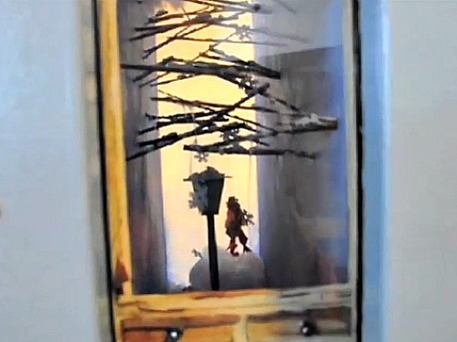 Prisons aren't known for their dioramas depicting major works of literature. But then again, college design students aren't often brought in to rethink the interior decor of a juvenile detention hall. The 2011 Design/Build project for the incoming MFA candidates in Applied Craft and Design at the Oregon College of Art & Craft have turned a section of Donald E. Long Juvenile Detention Center in Portland, Oregon, into a library and classroom for the underage prisoners.

The elements in place at the Donald E. Long detention hall—cinder-block walls, heavy metal doors and fiberboard bookshelves—weren't exactly homey. OCAC's advisers saw this project as the opportunity for the grad students to submit big ideas to a development subject with many influences. Early on in the two-week build, the students interviewed four detainees to get their input on how the wing could be improved. “You begin to value your work differently,” said MFA chair JP Reuer, “and to look at the process in a different way. You are forced to acknowledge that process is critical.”

Along the way, the class members (which included students from the Pacific Northwest College of Art) added natural wood, leather chairs and at least one diorama scene from The Lion, the Witch and the Wardrobe. Watch the video to see the Design/Build process in action and look for the dioramas around 3 minutes in.