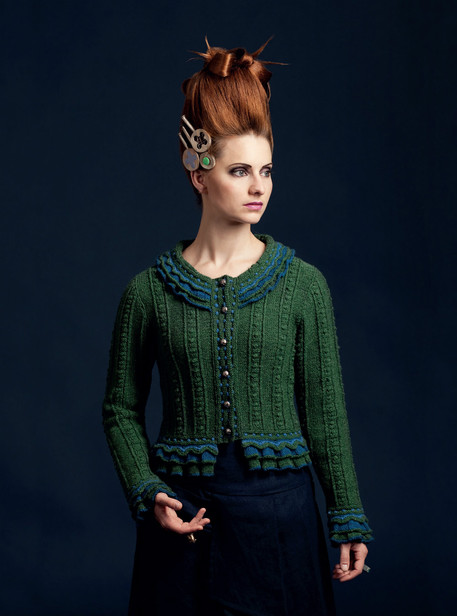 Trying to write an innovative knitting pattern may seem like a lesson in frustration. Given what can be accomplished with two needles and yarn, is there much that hasn’t already been done?

Scottish knitter Alice Starmore, known for her expertise in Fair Isle and Celtic knitting, found inspiration by scanning through the pages of England's treacherous royal history. The result is "Tudor Roses," a book where every pattern has a backstory. Each design is based on a historic woman from the medieval era.
The Tudor line may be best known for Henry VIII and his challenges with wives and children. Tudor women don’t play as big of a part in popular culture. Elizabeth I is remembered for her imposing aura. Anne Boleyn lost her had, thanks to Henry VIII. Mary, Queen of Scots was banished to castles for much of her life before being executed for plotting to kill Elizabeth I. Not exactly the anecdotes that one might consider the natural starting point for a cozy sweater. 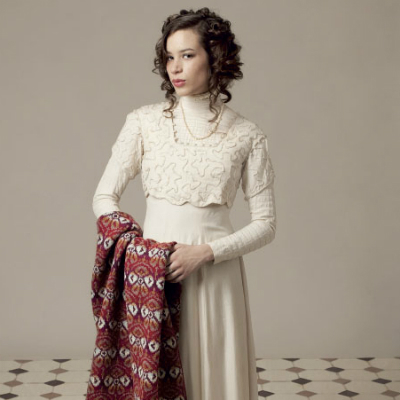 Lady Mary from 'Tudor Roses'
Starmore searched beyond the big headlines to create designs that adapted a historic persona into a piece of clothing. Margaret Beaufort (mother of Henry VII) was “complex and subtle in all her dealings and kept her relationships with warring factions in perfect balance,” says Starmore. The sweater design named after her in “Tudor Roses” has understated knotted borders and the garment can be worn in two ways, reflecting on Beaufort’s knack for balance.
Mary, Queen of Scots loved needlework and she regularly did it during her imprisonment. Mary was a knitter and Starmore based the design (pictured at the beginning of the article) on 16th century fabrics she would have been familiar with. The colors are inspired by the onetime queen’s passion for hunting. Such deep research may not be appropriate for all knitting project planning, but "Tudor Roses" illustrates how an unlikely source can inspire elegant new designs.

Alice Starmore also often uses naturally dyed wool in her work. In this BBC video she explains how lichens and plants can add distinctive color to wool.