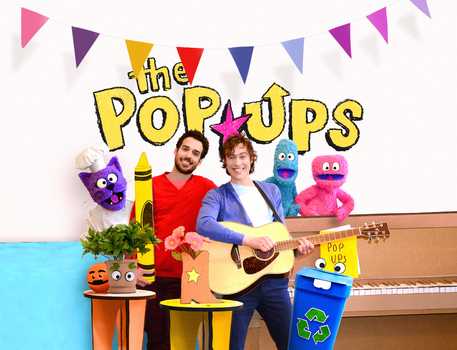 When Jason Rabinowitz and Jacob Stein are looking for inspiration, they only need a pair of googly eyes. Then they can turn just about anything into a puppet. Also known as the children's music duo The Pop-Ups, they've devoted a new webseries to the joys of turning just about any object found around the house into a talking buddy.

The first episode of the "Make It a Puppet" series turns a houseplant into a professor of photosynthesis with a little help from, yep, a pair of googly eyes.

Jacob and Jason explain that the series grew out of their own habit of turning everyday objects into puppets. The "Make It a Puppet" series by these two-time Grammy nominees includes a boot that chats about the weather, a basketball to discuss health and more. For each video, the duo works with puppet fabricator Katey Parker to create a fun and friendly image out of the object.

"Each object presented new puzzles to be figured out as far as usability while masking the operator, manipulating the mouth/face, and from a design perspective, making the objects look like puppets while still remaining the objects that they are," says Jacob.

"Hopefully it not only inspires people to make their own puppets, but can also captivate our younger audience into learning what these objects have to teach them!" Jason adds. "Plus puppets are just the most fun things ever, both to make and to use!"

Check out the fun they're having on the new video "Houseplant — Make It a Puppet" and watch for more at the The Pop-Up's YouTube channel.