Tips for Designing with Shutters 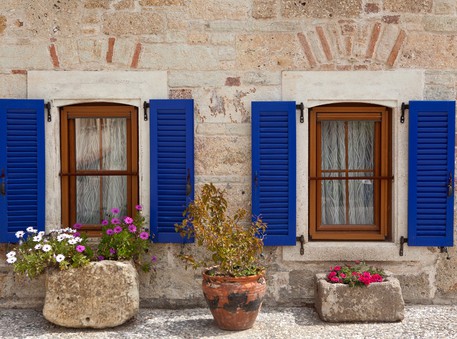 In the history of windows, shutters play a prominent role.

While the first windows coverings were animal hides, shutters have been around since at least 15th century Greece. These early ones were typically board and batten-style wooden slats that didn’t shut out much more than wind and animals.
The louvered slats most people associate with plantation shutter style didn’t arrive until the Victorian woodworking mills of the Industrial Revolution. In the late 1700s, new machines arrived that could crank out the even-sized wooden slats. These improvements made it possible to dial in the amount of light and drama required for a room while also allowing a breeze to pass through.
Most of the shutters in those days were installed on the outside, and primarily used to keep out wind, insects and critters. The popularity of the louvre style extended from the British, Portuguese and Spanish empires to their sun-kissed colonies.
Even in those days, shutters appeared in a range of styles. American colonial homes such as Thomas Jefferson’s Monticello, often had raised panel shutters that look more like small doors than louvered blinds. Not only are the raised panels arguably better at keeping out the elements, they fit better into the window frame shapes of the day.
Interior “privacy” or “pocket” shutters appeared around this time and would slide into plaster walls when not in use. After winter storm windows became more cost effective and widely utilized in the late 19th century, exterior shutters transitioned into a design element that homeowners left permanently open to accent the window frames. In the summer, they were moved into place to keep the sunlight from fading the carpets and upholstery. By the early 1900s, shutters were mostly decorative.
These days, decorating with shutters is mostly about style over function, but there are details that impact how you utilize them and in which room you place them.

Of course there are numerous other options, including cafe shutters that only cover the bottom half of the window — these can be great for dining areas, when you want privacy or a wind blocker, yet like to have light stream through on the top. Some of these details may seem inconsequential, but they impact the functionality of shutters.
For example, early users of shutters found that white ones reflected candlelight. Okay, you might not be worried about candlelight, but other details also matter. The size of the louvre impacts the amount of light leakage through the closed blinds. There are also traditional tilt rods and hidden ones, each of which offer a slightly different look.

Shutters are just one part of an overall aesthetic. A chic, cottage style might combine a leather armchair, laid-back colors and painted shutters. Rustic decor is inspired by natural elements such as stone or wood — wood chairs and tables, stone countertops and exposed wood beams — all of which will pair easily with stained wood shutters.

If you need ideas, you can check out a shutters site like http://www.shuttercraft.co.uk/wooden-shutters/ for a range of options to complement a rustic style. A more modern, minimalist design typical focuses on a simplified palette of two or three colors. The furniture tends to be streamlined and practical. Wood shutters can nicely complement this style by opting for hidden or foldable rods, or even motorized ones. 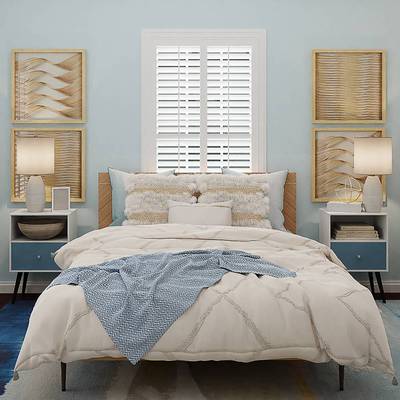 Photo by Spacejoy on Unsplash

Many people will opt for a conventional or classic style that is more relaxed and decor filled with mementos, knickknacks and framed pictures. White wood shutters can work well for this aesthetic, making a living area appear more spacious, inviting a lot of natural light.

When shutters are mounted inside a room, frames often add a finished look. There are simple frames like a bullnose with rounded edges or decorative ones that appear more like they belong around a painting. Decorators who pay close attention to details will want to decide if the hinges are white, brass or stainless steel. Sure, they’re small accents, but a homeowner who’s trying to create a streamlined, modern appearance will want to take those options into account.

You may think shutter doors only open from the middle, but there are other options. A bifold opening means the shutters open to one side like a door and then fold in half. This design can be useful if you only have space on one side of the shutters. Double hung or tier on tier shutters make it possible to open the top and bottom half of the shutter separately. These can be great option if you have furniture, such as a sofa, un front of the window that may partially block opening up the shutters.

Shutters are made in a range of materials. Of course wood is the traditional option. But there are numerous PVC (aka plastic) and composite options available. There are tradeoffs for each. Some homeowners prefer the appearance of wood. Others, concerned about rot, opt for PVC shutters that will likely last longer, but may not look as “classic.”

Once you take all of the variables into account, it's easy to envision shutters appearing in a variety of rooms and decors, you just need to make the choices that will work for your style.
Rate this post 0.0 rating Report post