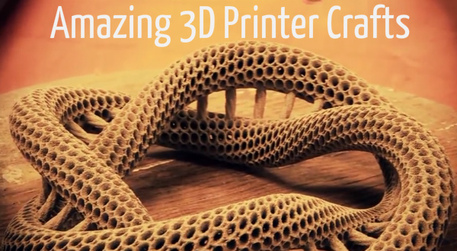 In the last few years 3D printers that make plastic prototypes and models have been celebrated as game-changers for manufacturers. Now, for a relatively cheap price tag, entrepreneurs can take a product idea from their mind to your hands (or at least a Kickstarter "fund me" page) in a matter of days or even hours.

While it's up for debate if anything that comes out of a 3D printer would be considered a traditional craft, there's a lot DIYers and crafters can do with a 3D printer that change what can be made and how. While 3D printers that use plastic get most of the attention, it's possible to print ceramics, metal, sugar, chocolate and more.

Watch these videos and you'll get ideas for beautiful and inspiring things that can be created with the press of a button.

A couple of years ago, the team at Canada's historic clay district, Medalta, asked artists, sculptors and technologists to come together and experiment with 3D printing ceramics. The resulting work ranges from geometric designs that could only have been created on a computer to ultra realistic sculptures that usually would have taken many days to create.

If you're starting to wonder about how you can print something in 3D, The Creators Project discussed some of the possibilities with the design firm Modelab, which uses technology such as Rhino and an Ultimaker to cast metal and molds. Many of the computer programs can take two dimensional ideas and connect the dots to shape them into 3D.

The startup company MatterFab wants to make 3D metal printing affordable for everyone. Given that metal powder is quoted as $120 a kilogram, there may be some question about what is "affordable." Techcrunch profiles MatterFab founder Matthew Burris (who grew up working in a forging shop) and offers some examples, including rings. If you're more interested in the technology than how the company was started, you may want to fast forward about four minutes into the piece.

Are you more interested in getting your hands on some delicious 3D printing rather than making it? The Sugar Lab designs 3D printed sugar for cake toppers, and some of the coolest things that can float in coffee. Ovation TV explains how these edible wonders are developed and "excavated."

If you're thinking these 3D printers are pretty impressive but not very DIY, wait. Jonathan Keep built his own 3D printer for ceramics and then outfitted it to print chocolate. There's got to be a county fair or mall kiosk desperately in need of a 3D chocolate printer. Want details about how to build your own 3D printer? Take a look at Jonathan building a 3D printer in time lapse.

Now that you understand all of the possibilities of a 3D printer, you'll probably want one you can take everywhere with you. Ben Heck demonstrates how he built a portable printer that's about the size of small suitcase. If you want to print sugar, chocolate, or ceramics, you'll probably need to tweak the design a bit. But if you built your own 3D printer, you can do that, no problem.