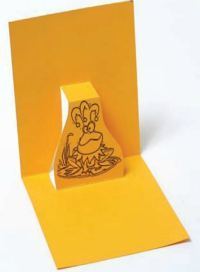 This project uses a singlesheet 90° Unequal Pop-Up with a 3-inch rubber stamp. (Rubber stamps are a great way to add personality or a theme to the pop-ups!) Use this technique to create pop-ups of any size — stamped or otherwise. 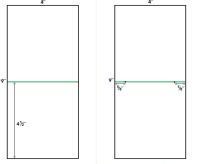 Backer Card Size
To determine the size of the backer card:

Measure the rubber stamp or sticker to be used for the pop-up artwork; then decide how far out the pop-up will extend from the background. Add these measurements together to determine how far up the pop-up will go when the card is closed. For the frog stamp shown, the backer card needs to be at least 8˝ long, so when it is folded in half it will cover the pop-up.

On the back of the 4˝ × 9˝ pop-up paper, measure halfway up from the short bottom edge and pencil a dot on each long edge. Lightly pencil a line from dot to dot across the width of the paper to create the centerline.

How to Place the Image

Decide whether you want the artwork image centered or not and leave at least 1⁄4˝ of space between the edge of the backer card and the pop-up or between 2 pop-ups on the same card.

For this example, the image is centered on the backer card 5⁄8˝ from each edge. 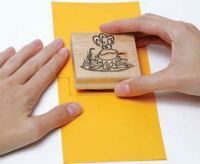 Measure 5⁄8˝ in from each long edge on the drawn centerline and pencil a dot.

Decide where you want the artwork image placed on the centerline and mark the width of the image with 2 dots. Measure down from each dot the distance you decided on for the distance between the pop-up and the background and pencil another dot. In this example, the distance is 1˝. Draw another horizontal line to connect these dots to create the top line of the pop-up. 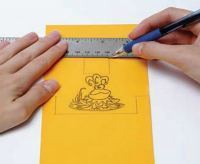 Draw vertical lines between the pop-up top lines and bottom lines. With a craft knife, cut on the drawn pop-up sidelines to make the pop-up side slits. Now that you’ve drafted the pop-up card, simply follow the rest of the steps to finish the example. You can put as many pop-ups on the same card as the backer card width will allow!

Draw the backer card centerline to meet up to the pop-up sidelines. Score the drawn horizontal lines with a creasing tool. Erase all the pencil lines. 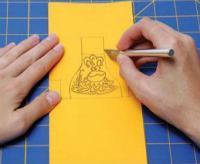 Gently pull the center cut area toward you. Crease a mountain fold on the pop-up centerline and valley folds on the background centerline and the top and bottom horizontal pop-up lines. 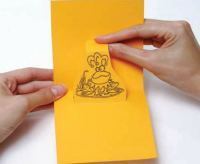 Fold the pop-up completely closed and press it down on a flat surface to ensure straight and tight folds. Reopen the pop-up to see the finished Rubber Stamp or Sticker Pop-Up Note Card. 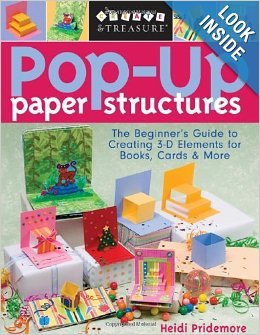