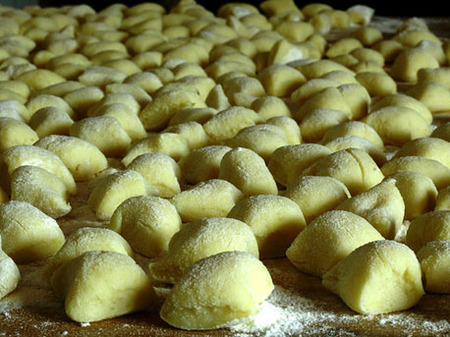 Gluten-free gnocchi sounds much more complicated than it is. Even more, this recipe is surprisingly similar to the traditional Italian recipe. Steaming the homemade dumplings creates that treasured tenderness for which gnocchi is famed while rice flour creates a gluten-free friendliness almost any diet can appreciate.

- Potato ricer
- Double boiler (with a colander and tight-fitting lid)

With skins on, prick potatoes with knife to allow steam to escape. Bake potatoes for 45 minutes in 400-degree oven or until a fork goes into the potato easily. Remove and allow to cool 15 minutes.

Remove peels (easier after the potatoes are baked) and rice potatoes into a large mixing bowl. Ricing creates a smooth potato texture. Add salt, flour and egg. The egg is essential for gluten-free gnocchi because its protein will keep the dumpling together. Mix by hand until ingredients just come together.

Divide the dough into four, and then roll out each section into 1-inch wide ropes. If the dough does not roll easily, return to mixing bowl and add 1/4 cup more flour. Roll and test, adding slightly more flour each time until the dough rolls with some ease.

Once all the dough is rolled into ropes, cut the gnocchi with a dough scraper or wet knife into 1- to 2-inch long pieces.

Consider rolling dumplings along the back of a fork to form the traditional gnocchi ridges, great for capturing buttery sauces, or skip this step to save about 20 minutes of work. I personally haven't found the ridges to add that much. Also, consider making the gnocchi pieces slightly bigger than the traditional recipes, also to save time.

Set up a double boiler with a pot of salted water. The water should be just under the colander without actually boiling through. Place the gnocchi, one cut rope at a time, on to the colander, and steam for 7 minutes per batch with the lid on. Remove and keep cooked dumplings on a hot plate to prevent the gnocchi from hardening and losing tenderness.

Serve with a brown butter and sage sauce, the traditional pairing, or fry in butter for tiny potato dumplings with a lovely golden-brown crust.