How to Chain Stitch (Crochet) 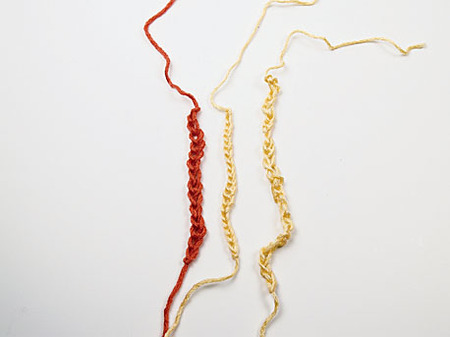 The chain stitch is the foundation of so many crochet patterns and projects, and, if mastered, can also create a surprising amount of crochet creations without any other stitches.

Quick Reference:
Yarn over: abbreviated “yo” in patterns, always refers to wrapping the yarn from back to front over the top of the hook and down across the throat of the hook. 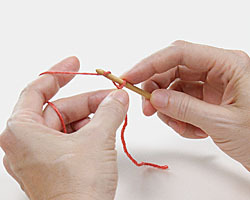 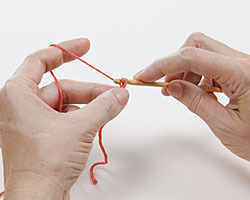 The right hand turns the hook downward to a “6 o’clock” position, catching the wrapped yarn with the hook, and pulls it through the loop already on the hook. The finger holding the loop on the hook lets go at this point, and will take its place to control the new loop, now on the hook. DO NOT pull or tighten the stitch once completed. The chain now being formed serves as a base for the next row of stitches, and must be made loosely. To work the
following row, the hook will be inserted between the threads of each chain stitch, so be sure to work loosely enough to allow insertion.

Practice making chains until it becomes a fluid motion and the resulting loops become even in their size and shape. 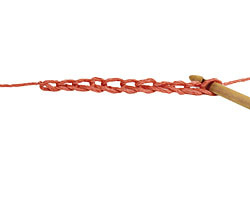 Pattern instructions will nearly always start with “Chain ____,” with a number filling in the blank. To count chains, lay the work flat, so that the side with a flat braided or sideways Vs appearance is facing up. Each V is one stitch. All other crochet stitches will also have the sideways V at the top of every stitch, and this is what is counted to determine the number of completed stitches. Never count the loop currently on the hook—there was a loop on the hook before a stitch was made, and as it’s replaced continually by a new loop, it is still not actually part of any stitch. Start counting with the V immediately below the hook, and stop at the last V in line before the tight knot at the end. 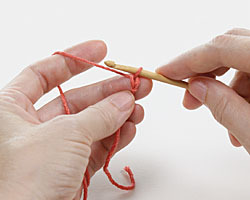 Tip: It doesn’t matter whether yarn is pulled from the outside or the inside of a ball. In either case, even tension is easier to achieve by pulling out a yard or two at a time instead of requiring the action of the hook to pull yarn from the skein for each stitch. Many crocheters prefer to pull from the inside as they work, though, since it’s a simpler motion and doesn’t cause the yarn ball to roll around as much.

Deb will be an expert for CraftFoxes from Monday November 5th through Friday November 9th. If you have any questions for her about learning how to crochet, be sure to include them in the comments below.