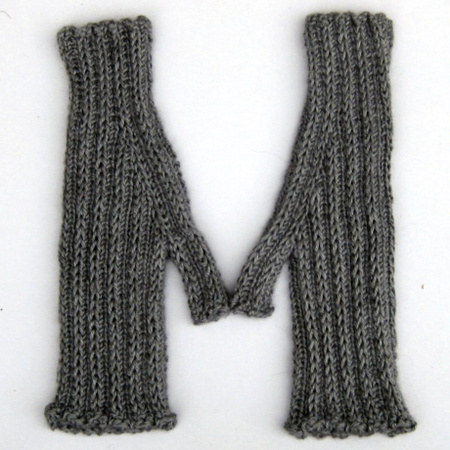 Are you intimidated when your knitting pattern tells you to work increased stitches "in pattern?" It's tempting to skip over instructions that seem too complicated and just hope that it will all work out, but I learned the hard way that if you don't work increases "in pattern," your finished object won't look like the pattern photo. Plus, it might not fit, particularly if the stitches you were supposed to be working "in pattern" were ribbing stitches. 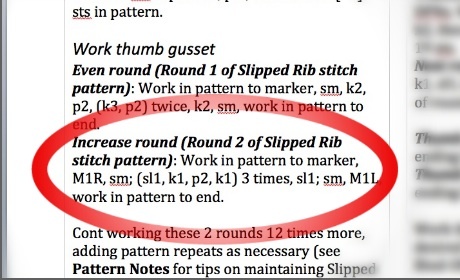 Get familiar with your instructions and your stitch pattern 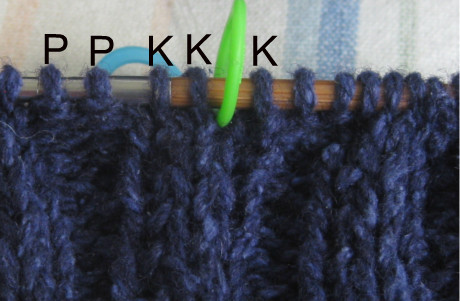 Most patterns will instruct you to place stitch markers at least one row/round before you begin increasing. The stitch markers are your cue to increase a stitch either before or after the marker, depending on the pattern instructions.
Before you work your first increase round, note where each stitch marker is in relation to the stitch pattern. For example, in the photo of the mitts in progress, you'll see one of the two stitch markers used in this pattern. This stitch marker falls just after the first stitch of the k3, p2 pattern repeat, separating that first stitch (on the right) from the remaining four stitches in its repeat (on the left).
The mitts instructions tell you to work the increase stitch immediately after the knit stitch on the right, before you slip the marker. In other words, the new stitch will fall in between the knit stitch on the right and the marker. 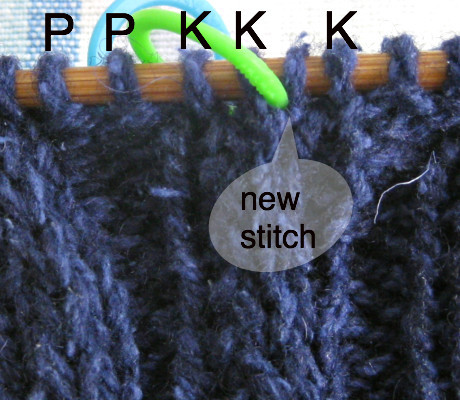 In a nutshell: when you get to the new stitch before the marker, work it based on what would logically come next in the stitch pattern, according to the instructions for that row/round.

For example, in the photo, you'll see that the increase round has already been worked, and there is now a new stitch before the marker. You know that the stitch pattern for this round of the mitts is k3, p2. You also know from Step 2 that the new stitches will continue on from the first stitch of the k3, p2 repeat. So, when you come to this new stitch, you'll knit it because it's now the second stitch of the k3, p2 repeat, and the second stitch of k3, p2 is also a knit stitch.

On all subsequent rounds, continue to work this new stitch "in pattern." For these mitts, that means this stitch will get slipped every subsequent increase round, just like all of the second stitches in the repeat. 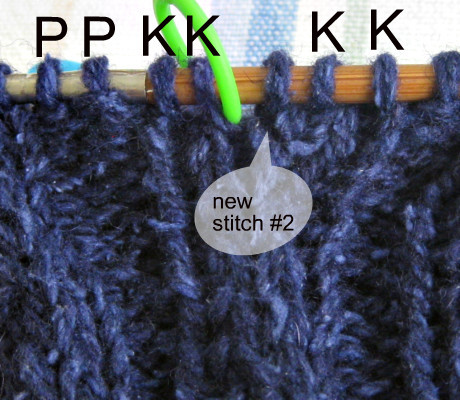 Work the second new stitch "in pattern"
Let's try another one! In the photo, you'll see that another increase round has already been worked and that there is now another new stitch before the marker.
You can also see in the photo the first two stitches of the k3, p2 repeat—the original knit stitch, and the new knit stitch you worked in Step 3—preceding this second new stitch. That means that when you go to work to the new stitch, you'll knit that new stitch because the third stitch of k3, p2 is a knit stitch. 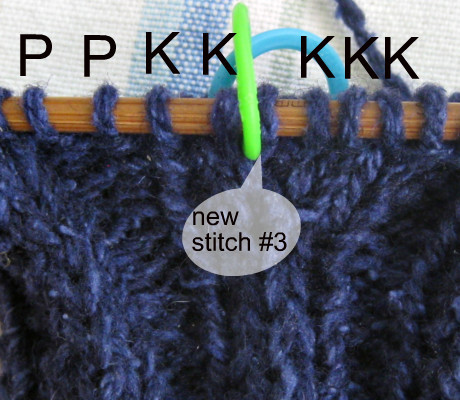 Work the third new stitch "in pattern"
You're probably getting the hang of this, but let's do one more since this round of the mitts example will be a little different.
Again, you'll see in the photo that the increase round has already been worked and that there is now a third new stitch before the marker. As a side note, you can also see that the work to the right side of the marker is really starting to lean to the right because of the new stitches!

In the photo, all three of the knit stitches in the k3, p2 repeat—the original knit stitch, and the two new knit stitches you worked in Steps 3 and 4—precede the new stitch. That means that you will purl this new stitch because the fourth stitch of k3, p2 is a purl stitch. In the mitts pattern, this stitch will always be purled from here until you bind-off. 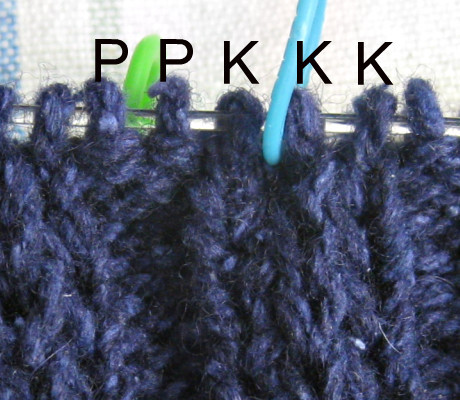 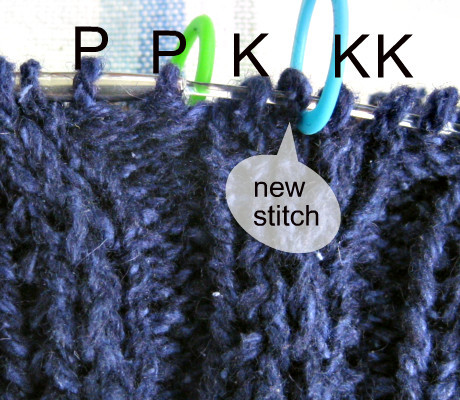 What if my increases aren't "mirrored"?
If your increases fall after a marker and aren't "mirrored" with a set of increases that fall before a marker, you'll use a similar method to Steps 2 and 3 to determine how to work the new stitches associated with the increases. This is a bit trickier, though—kind of like saying the alphabet backwards! 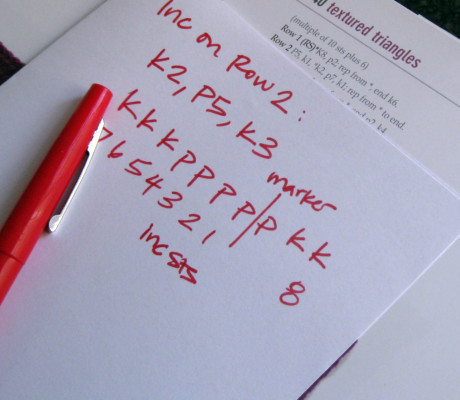 What if my row/round is too complicated to memorize?
The k3, p2 stitch pattern in the mitts example is worked over just 5 stitches and is easy to memorize. If you have a longer pattern repeat, you might want to take the time to write out how you'll work the new stitches. I like to write out the instructions and indicate where in the repeat the marker falls, so I know where to start adding new stitches. Then I number the stitches in the order I'm going to add them.

You'll see that my notes run right to left, the way that the stitches will present themselves on the needle. You'll also see that because I have 8 increases and only 7 remaining stitches in the repeat, I've gone back to the beginning of the repeat for the last new stitch.

You could also jot the information down on your pattern or make your own chart. This is especially helpful if you are also increasing on multiple rows/rounds with different instructions (see Step 9). 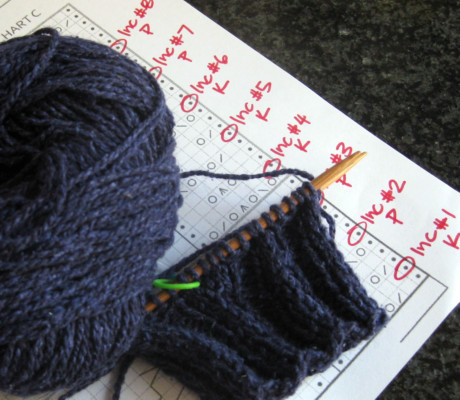 What if my pattern tells me to increase on more than one row/round in the stitch pattern?
Your pattern might be more complicated than the simple mitts in the example, which only has two rounds. For instance, suppose your stitch pattern has 32 rows, and the instructions say to increase every 4th row, 8 times. It sounds complicated, but we can actually just use the same approach as in Step 1
First, figure out which rows are increase rows. In this example, imagine you'll be increasing on Rows 1, 5, 9, 13, 17, 21, 25 and 29. As described in Step 1, this means you'll need to consult the instructions for Rows 2, 6, 10, 14, 18, 22, 26, and 30 to know how to work the new stitches on these rows. Then, just as in Steps 2-3 and Step 7, as applicable, identify the stitch that logically fits in the sequence when you get to the new stitch.
I find that it is convenient to make notes on your pattern about how you'll be working the new stitches, similar to Step 8, so I don't have to stop and look at my pattern again. 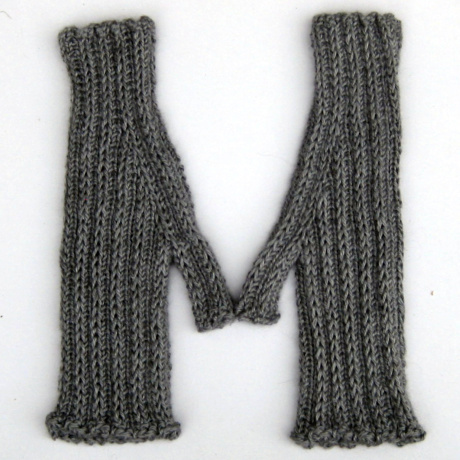 That's all there is to it!
I hope you feel empowered to start tackling projects that have both texture and shaping. Maintaining the stitch pattern can produce great results, and I encourage you to try it out with the M is for... Mitts pattern. Happy knitting!

Kendra Nitta knits, sews and designs primarily with silk and plant-based fibers. She has been designing handknits since 2007, and her work has been featured in several books and magazines. Follow
along at Miss Knitta.