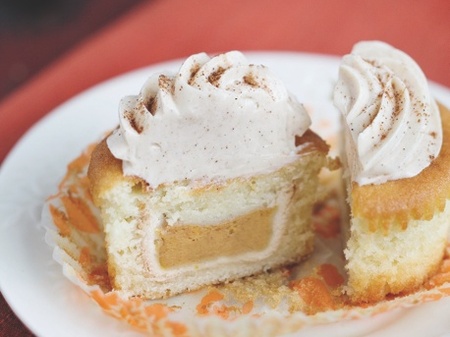 When you consider that pumpkin pie is the second most popular pie in America, you'll understand why the combination of pie inside cupcake is such genius. That's right, a mini pumpkin pie, INSIDE a cupcake. With frosting. (My mouth is watering).

To save time, you can make the miniature pies up to 2 days in advance––just store them in the refrigerator until you’re ready to make the cupcakes. You can also use store bought crust to save time if you'd like.

Although they sound like the perfect Thanksgiving dessert (and they are), we've done plenty of research and are happy to confirm that they taste just as good at any time of year. Enjoy!

Pumpkin Pies
1 (16-ounce) batch pie crust dough (your favorite recipe or store-bought, enough to make 2 one-crust pies)
1 (15-ounce) can pumpkin pie filling, made as directed on the can

To make the mini pumpkin pies, preheat the oven to 425°F and lightly grease a 24-cup miniature muffin tin. Use a rolling pin to roll out the pie crust dough on a lightly floured smooth surface until the dough is about 1/8 inch thick. Then use a 2 1/2-inch circular cookie cutter to cut out 24 small disks. Ball up the scraps of dough and wrap in plastic wrap for later use.

Press the dough circles into each cup in the prepared tin and fill three-quarters full with the prepared pumpkin pie filling. Keep in mind the pumpkin pie filling will expand a bit while baking. Bake the pies for about 7 minutes. With the pies still in the oven, turn the oven down to 350°F and bake for an additional 7 to 10 minutes, until the edges of the crust have browned and the pumpkin pie filling no longer jiggles when you gently shake the tin. Allow the pies to cool for 5 minutes in the tin and then carefully transfer them to a wire rack to finish cooling while you mix the cupcake batter.

To make the cupcakes, line 2 standard muffin tins with 24 paper liners. Use a stand mixer fitted with the paddle attachment or a hand mixer on medium speed to combine the butter and cream cheese for about 90 seconds, until smooth. Add the sugar and mix on medium-high until fluffy. Add the eggs, one at a time, mixing in each egg completely before adding the next. With the mixer on medium speed, add the vanilla, baking powder, baking soda, and salt. Finally, add the flour, ½ cup at a time, alternately with the milk, ⅓ cup at a time, mixing until each addition is fully incorporated before adding the next. Continue to mix the batter on medium-high speed for 30 seconds, until smooth and creamy.

Spoon a heaping tablespoon of batter into each cup in the prepared tins. Place a cooled pumpkin pie into the center of the batter and press it gently. You don’t want the pie to touch the bottom of the tin. Cover the pies with another heaping tablespoon of batter so the top and sides of the mini pie are completely covered and the cup is about three-quarters full. Bake for 25 minutes, until the edges and tops of the cupcakes have turned golden brown and the cake springs back when you gently press your finger into the top of it. Allow the cupcakes to cool in the tins for at least 10 minutes before moving to a wire rack to cool completely.

To make the frosting, melt the cream and cinnamon chips together in a microwave in a small microwave-safe bowl for about 45 seconds on high. Stir the mixture until all the chips have melted and place in the fridge while you prepare the rest of the frosting. Using a stand mixer fitted with a paddle attachment or a hand mixer, cream together the butter and cream cheese on medium-high speed for about 30 seconds, until smooth. Whip in the powdered sugar, 1 cup at a time, until the mixture is fluffy. Finally, with the mixer on low, drizzle in the cinnamon chip mixture. (Make sure it has cooled a bit—if it’s too hot, it will melt the frosting.) Spread or swirl a generous helping of the frosting onto the cupcakes using a spatula or pastry bag

Put the leftover pie crust scraps to good use by making cinnamon-sugar decorations. Mix the sugar and cinnamon in a small bowl. Use a rolling pin to roll out the reserved ball of dough onto a lightly floured smooth surface until it’s about 1/8 inch thick, then cut out quarter-sized circles with a small cookie cutter or frosting tip. Place them on a baking sheet, sprinkle them with a little bit of the cinnamon and sugar mixture, and bake for about 10 minutes at 350°F, until they’re golden brown. Once they’re cool, put one on top of each of the cupcakes and serve. 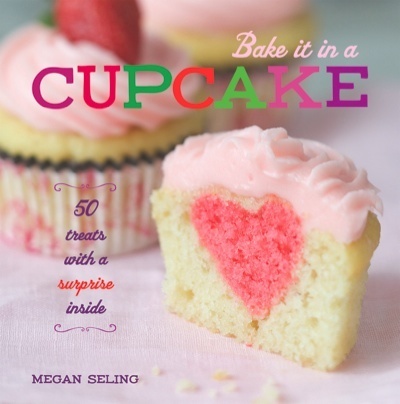 Excerpted with permission from "Bake it in a Cupcake: 50 treats with a Surprise Inside" by Megan Seling and published by Andrews McMeel Publishing.