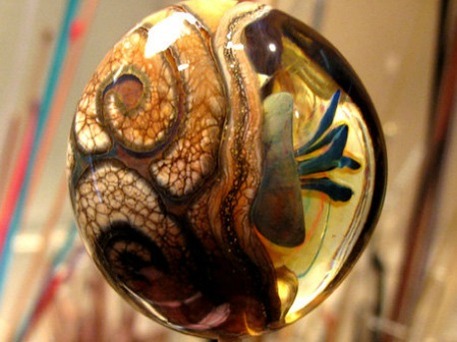 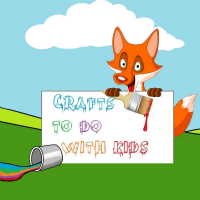 This glass bead made by Sherry Bellamy is so otherworldly it looks like it could have emerged from a UFO. She sells tutorials on how to create such stunning creations on Etsy, so they must be a part of this world (a very cool part).
But NASA is sending its own flying object to Mars, a rover named “Curiosity,” which is set to land on Mars on August 6th, 2012, that might discover something truly from another world. In the spirit of imagination and discovery, I’ve rounded up a list of space shuttle crafts to commemorate the historic landing that may put us in touch with other life in our solar system.

Recycled Rocket
To begin their journey and kick-start their imagination, kids can make this recycled rocket. Using regular items from the recycling bin, it also helps you and your family be a good steward of this planet by repurposing things normally sent to the recycling center.
Get the space shuttle craft how-to at No Time for Flash Cards.

Space View
This project imagines what an astronaut might see if he or she were landing on Mars with Curiosity. It's the view from the ship, with a nice, happy alien welcoming visitors to the new world.
Plaid Kid's Crafts shares the space craft.

Moon Rocks
What a brilliantly simple idea of creating moon rocks! To customize it for the occasion, have the kids design their own Mars rocks. If you have no paper towel or toilet paper rolls around to display them, use an aluminum can wrapped in paper.
Get the moon rocks how-to at DLTK.

Extraterrestrial Paper
How about a fun paper project to imagine extraterrestrials that also doubles as a lesson on symmetry? Plus it uses up a bunch of paper scraps, possibly cleaning the craft space of some debris.
Deep Space Sparkle has the space creatures paper craft.

Alien Lamp
Looking for a fun new nightlight? Check out this tutorial to make a fun and creative alien abduction lamp! And the best part? It's total cost is around $5!
Find this fun alien spaceship craft at Dollar Store Crafts.