7 Surprising and Fun Crafts You Can Make from Towels 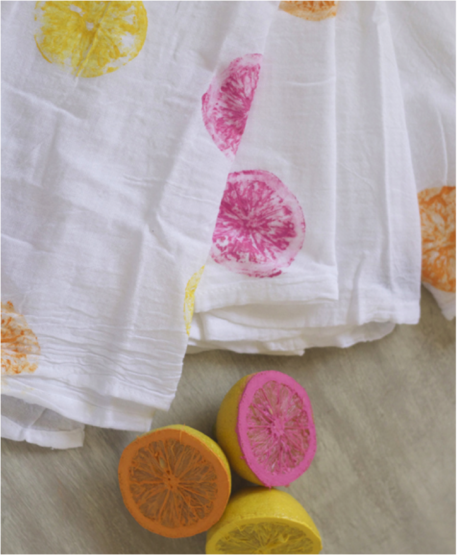 Ever look at your old towels and think “that would make a great DIY project”? Don’t feel bad if the answer is "no." Towels aren’t used a lot in DIY projects, but should be! Many great upcycling and refashioning crafts can be done with old towels. Gather up all of those discarded dish towels and bath towels. We are about to repurpose them into our favorite towel crafts! 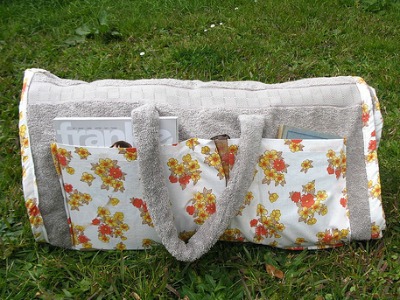 Convertible Beach Bag with Towel
If you bring a bag and a towel to the beach to lay on, this craft is for you. It’s a beach bag that folds out into a sunbathing towel! To make it, you’ll need some fabric, stuffing, sewing supplies and velcro. Plus two medium-sized towels.
Cut the first towel so you have one large piece to act as the pillow and two long thin strips for handles. After attaching the pieces with a sewing machine, fill the pillow with the stuffing and sew it shut, leaving about two inches where you will sew the second towel to the edge of the pillow. Next, roll up the pillow into the towel and sew the handles where they’ll be convenient for you. Sew the Velcro strips to the inside of where the towels overlap to keep the bag shut. Also sew the fabric as pockets wherever you want them!
You have a beach bag, plus a towel with a pillow to lay on at the beach. 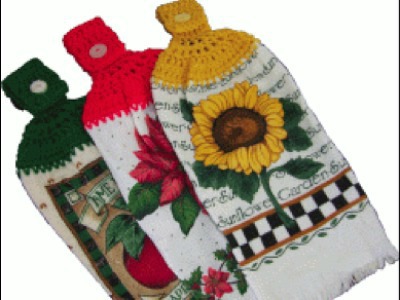 Crochet-Top Dishtowel
If you already know how to crochet or have always wanted to learn, this craft is the perfect way to begin! It takes a regular dish towel and turns it into a unique towel that you can hang in your kitchen that won’t slip off of handles. For this craft, you’ll need crochet supplies and a dish towel. You can also add a cute button! There are many different options for the pattern of your dish towel topper, which you can browse through to decide which one you like. It’s a fast and fun project and these are great for gifts, too! 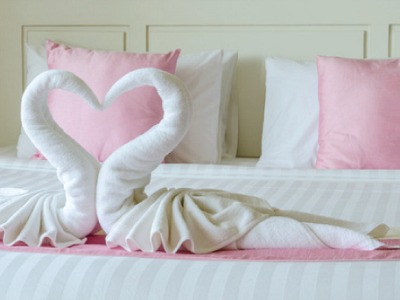 Towel Origami
You know when you watch those old movies about grand hotels that make their towels into crazy shapes? You can do that in your own home! Towel origami is so fun and the best part is you can try it over and over again without ruining the towel. All you need for this is towels! Although you can add extra add-ons like fabric or pipe cleaners for certain projects if you decide to get really creative. There are endless possibilities for your origami such as towel swans, monkeys, roses and baskets. You can also go the extra mile and tie-die your towels to make them pop! 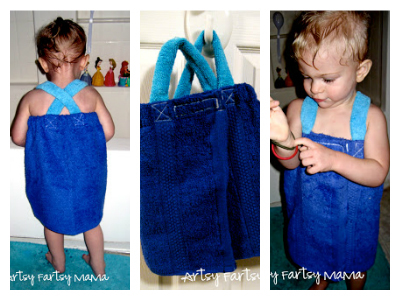 Kids Towel Wrap
With just a few old towels, you can make your little one a towel wrap to wear after baths. Customize it by using a child's favorite color, or you can even sew superhero patches or other pictures on the back. You’ll need a regular towel, a washcloth, velcro and elastic.
Take the towel and fold the long edge over two inches and sew along the edge. This creates a pocket for your elastic to slide into. Sew the edges after the elastic is in to hold it in place. Then, cut the washcloth into two long pieces that will be the straps of the wrap. Sew these onto the tops of the wrap. You can measure your child to make sure the straps will be comfortable. Your child will be running around the house after their bath in this comfy and cozy towel wrap! 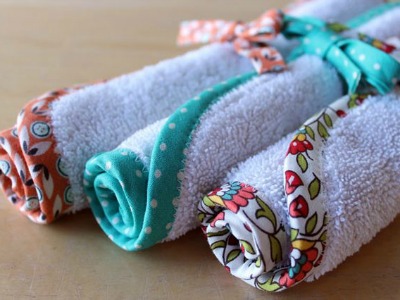 Washcloths with Trim
This project makes old towels and look new washcloths! All you’ll need is your old towels, some bias tape in a pattern you love and sewing materials. Cut the edges of your towels off to the size you want. You can also round out the edges of the towel. Next, pin the bias tape all around the edge of the towel. Next, sew on the bias tape around the edge of the towel, sewing both sides into place with a zigzag stitch. Just like that you’ll have towels that look like they came from the store! 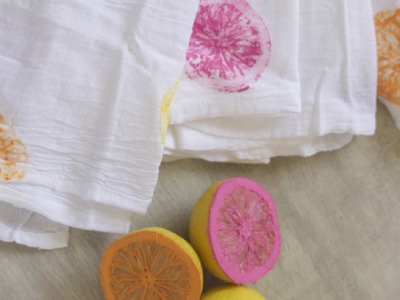 Citrus-Stamped Tea Towels
This project is super easy and cute. You’ll need some flour sack tea towels, paint in the color of your choosing and any kind of citrus fruit. Cut the fruit in half and press it to a paper towel to get out the excess juice. Paint the flat side of the fruit with the color of your choosing, then press down firmly onto the towel. Make sure you let the towels dry completely. And that’s really it! You can get creative with different colors, patterns and fruits to make one-of-a-kind towels that are perfect for summertime! 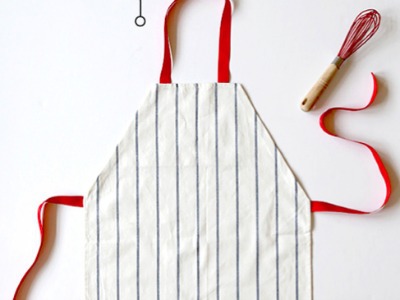 Dishtowel Apron
To make a dishtowel apron, you’ll need a dish towel, an iron, ribbon and sewing supplies. Lay the dish towel out flat and fold over the top two edges diagonally to form an apron shape. Trim the excess fabric and sew the edges to create a seam. You can also use a glue gun to glue the fabric together instead of sewing! Sew or glue the ribbon onto the top to make the neck hole and do the same for the apron strings. Simple as that and you have an apron! These are perfect for kids to wear in the kitchen!
Next time you’re unsure about what to do with all of your old towels, turn them into something new with these fun DIY projects!

Kacey Mya Bradley is a lifestyle blogger for The Drifter Collective. She graduated with a degree in Communications while working for a lifestyle magazine. Her love for the world around her is portrayed through her visually pleasing, culturally embracing and inspiring posts. You can finder her on Twitter and Pinterest. The Drifter Collective is An eclectic lifestyle blog that expresses various forms of style through the influence of culture and the world around us.
Rate this post 0.0 rating Report post