A Sweet Date Night with 'Clueless' and Breyers Gelato 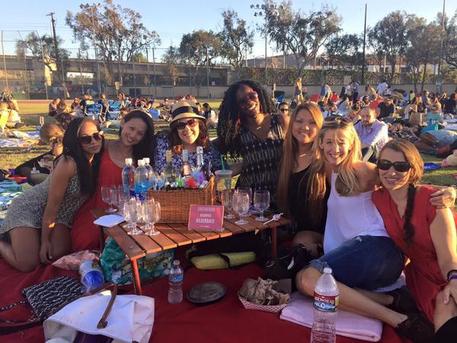 My wife and I hadn’t been on date since the birth of our first child. Spending five weeks focused on feeding, burping and changing diapers can feel a bit like you’re marooned on Baby Island. So we were thrilled that Breyers invited us to a Street Food Cinema screening of Clueless and gave us an excuse to get out of the house. Plus, how often does anyone get the chance to add “Gelato journalist” to his or her resume?

Being new parents, we’re never quite sure how our five-week old will react to a new situation. He’s just starting to make sense of sight and sound, and even the clank of a garbage bag into a trash can make him wig-out.
A big thanks to Breyers and the Blogger Network for sponsoring this post 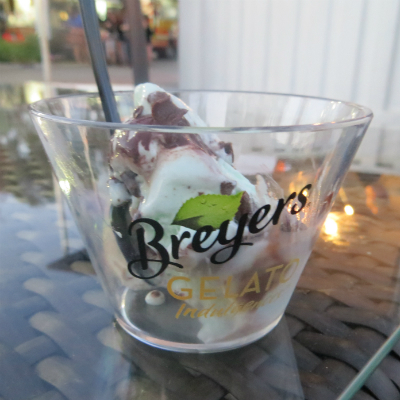 We rolled up to Syd Kronenthal Park in Culver City, California with the giddiness of two castaways recently rescued from Baby Island. Our son was in the back seat so this venture into the exciting unknown wilds of Street Food Cinema. The ’90s romance “Clueless” was going to be his first movie. A totally slammin’ history lesson. This kid’s gonna be awesomesauce.
Street Food Cinema is a drive-in theater except you’re sitting on a lawn instead of your car. Don’t worry, motor vehicles are still involved. Plenty of scrumptious munchies are served up from food truck windows. Plus there are clever companies who know the anticipation that comes with sitting on a lawn waiting for a movie to start can only be satiated with free food samples. 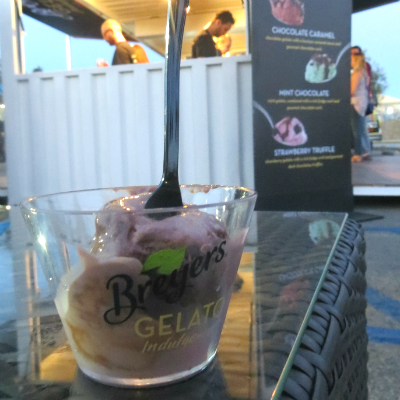 This is where Breyers comes into the evening. Sweet, sweet, Breyers. If you had told me in fifth-grade that there would be a place where they handed out up after cup of gelato samples I would have never seen middle school. Why bother? I would have dropped out to follow the Breyer’s gelato stand around this great country of ours. Luckily for my parents’ sake, I was totes unawares.
Gelato, for those you who didn’t, like, ace “Dairy Confections 101” is a frothier, richer ice cream with a name that speaks to its Italian culinary heritage. My wife and I tasted the Breyers Strawberry Truffle, Mint Chocolate and Chocolate Caramel. I was all about the chocolate gelato with caramel sauce and chocolate curls. Natch. My better half was sweetin’ on the mint gelato with rich fudge swirl. 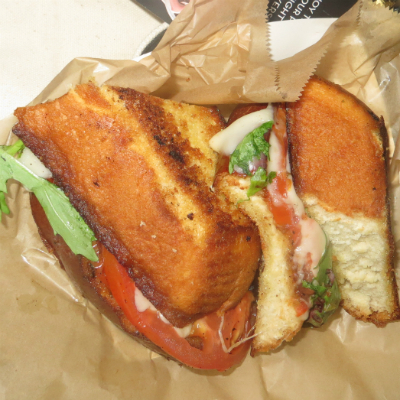 A Caprese Sandwich from Bread Crumbs Sandwiches food truck
My son? He still takes his milk straight, no chaser. But if he’s anything like his father he’ll be hitting the gelato pretty hard by the time kindergarten rolls around. The super cool thing about screening a classic movie in LA is that some of people involved in the flick will stroll out, like it’s y’know, no big deal. As if! So Nicole Bilderback aka Summer and producer Adam Schroeder were interviewed before the projector rolled. Totes amaze, no?
Adam said he thought a film like “Clueless” would need starpower to get made today. “It’s the only movie I’ve worked on where the executives took a look at it, didn’t want to change anything and gave me a million more dollars to buy music for the soundtrack,” he admitted. Nicole’s still a total Betty who said she had no idea the whole “suck and blow” scene would turn into something she still hears people yell at her today. 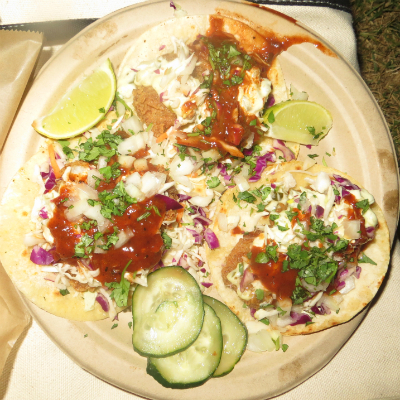 A plate of crunchy delight from Say Fish Tacos
Once the movie started we were a concerned my little one would completely bug out. No worries, he decided to watch another picture screening on the inside of his eyelids for the whole night. Must have been a pretty good plot. And seeing “Clueless” for the first time on well over a decade was pretty tasty. Almost as sweet as a Breyers Gelato Indulgences. Breyers has nine flavors of gelato, which means you’ve pretty much got every genre of film covered with at least one of them. Ergo, date-night dessert at home with a movie just got a whole lot easier.
Then we were Audi. Or at least as Audi as you can be driving a PT Cruiser home. 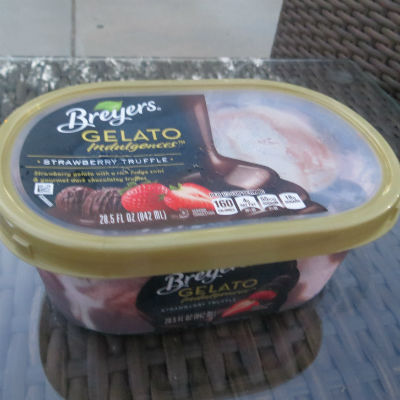