Bjork's 'Biophilia' is Inspired by String Theory; So Are Bjork Crafts

Bjork's new album "Biophilia" began as a rumination about science, humanity and nature. To get inspiration, she researched string theory, astrophysics and other fields of study where lofty theories and the hard facts about the universe combine in a miasma of truth. For our study of the crafts she inspired, we unraveled a universe filled with pixie style and post-punk, self-aware humor.

To begin this round-up, let's just get the swan dress out of the way, shall we? There are several versions of the Marjan Pejoski-designed ensem she wore to the 2001 Oscars. The one pictured here was recreated by a shop called Frankiestein, is made out of tulle and sells for $595, which seems a bit pricey for something most people will only find useful as a Halloween costume. Diehards can also find a swan dress by Furgots for $350, if you still want the big statement for less cash.

Crystalline Vinyl Sticker
For those who have already seen the new video for "Crystalline" you know it's full of red hair. This 3-inch, vinyl Bjork sticker by VethBlack for your MacBook may look more like Strawberry Shortcake with a blowout than the Icelandic princess, but it's a pretty good bargain for Bjork memorabilia at only $3. 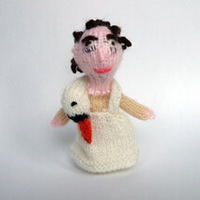 Bjork Finger Puppet
Bjork always seemed like a bit of a mystical creature, so why not use the knitted Bjork finger puppet to spin fantastic tales of her flying among the gnomes and woodland nymphs that live at the base of the ice-covered mountains of her homeland. That's a lot of potential entertainment filled with awkward, high-pitched impersonations for only $12. 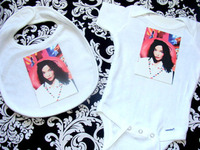 Bjork Onesie and Bib
Why have a baby Bjorn when you can have a baby in Bjork? (OK, it's a cheap joke, but how often do you get the chance to make it?) This Bjork onesie and bib set (with a heat-pressed image on cotton) puts the cover of "Post" right in the line of fire of a whole lot of spit. 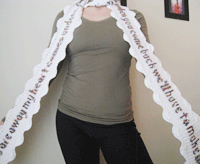 Unravel Scarf
Hardcore and crafty fans of "Homogenic" are probably smacking their foreheads right about now. The song "Unravel" is all about yarn, so why not turn those "Unravel" lyrics into a Mohair scarf with rainbow-colored metallic lettering and scalloped edges? LeanGreenBean already did it, and will sell it to you for only $25. 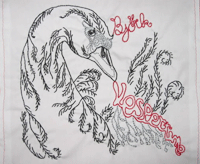 Vespertine Bag
For this tote bag inspired by the album insert for "Vespertine," Nerdbomber6 traced the image of Björk's Vespertine album insert using an iron-on transfer pen and embroidered it onto the bag. Not for sale as far as we can tell, but could probably fetch a pretty penny from the right fan.

Day of the Bjork
You probably thought of Bjork as an international star, but you may not have realized she's an inter-holiday phenomenon. That's right, she's not just for Halloween costumes anymore. Now your friends who toss back tequilas on The Day of the Dead (aka Dia de los Muertos) can have a Bjork to call their own. Karla Ruiz (or Suicide Kitten) created this $8.99, 5 x 7 print based on one of her paintings.

Bjork Mini-Buns Wig
If you want look like Bjork in a jiffy and don't have several hundred dollars to spend on a swan dress, there are the mini braided up-do bun cover hairpiece attachments. As creator Puppycatmeow promises: "Just the thing for your wedding, prom, formal occasion or just for everyday wear!" These $72 pieces, made out of synthetic hair, are available in an array of colors. Here they're modeled by Roxanna Bina (aka Foxy Roxy) of Teacups and Couture.