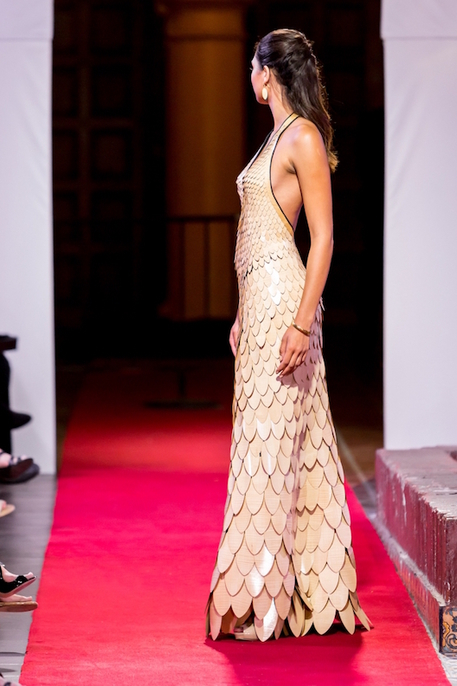 When time came to pick the Best in Show winner of The Craftys this year, there were several impressive category winners, including a paper castle fit for a princess and a painting made from thousands of pieces of duct tape. Host Mark Montano, who also helps judge the competition, surveyed them all closely, took several close looks at Paul Schurch’s maple gown and said “that is amazing.” All of the reviewers shared Montano’s wonderment at a dress made out of 1,380 of lacquered wood scales and bamboo/rayon fabric.

Schurch was watching The Craftys lifestream when Montano announced the big prize, which includes a trophy and a $1,000 check. “Wow!” was the master craftsman’s initial response. He made the maple gown as a test of his skills. “I wanted to push the limits of wood, and believed that making a dress that was comfortable, unique, flexible, cute and wearable was a challenge that I could not pass up,” he explains. Creating the dress took several months of experimentation.

One of the big challenges of making wooden clothing is creating a comfortable “fabric” out of rigid wood. The video above demonstrates how Schurch’s floor-length gown ripples and flows with the wearer’s moves.

While Schurch spends most of his time building custom furniture, he’s sold one dress and has a commission to make two cocktail dresses.

When he was 15, the Californian's family moved to Switzerland. He found an apprenticeship making pianos. Eventually he worked as church organ builder in Switzerland. He moved back to the U.S. at age 23 and then returned to England to work as a boat builder and antique restorer. When he wanted to learn the craft of marquetry, he . As he explains in an interview with Gwinnett Woodworkers, his new pieces, which often include never-before-seen functionality and designs, are based on concepts he’s envisioned.

Congratulations to Paul Schurch on his big win! If you want to learn more about his projects and skills, check out his site Schurchwoodwork.