Celebrating the Peeps Diorama Contest, A Fond Look Back (VIDEO) 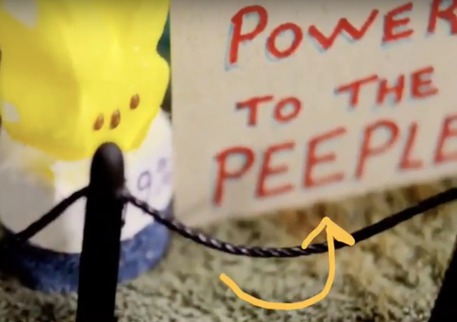 After 10 years, The Washington Post cancelled its Peeps contest in March because, they said, a lack of interest. Apparently recent years have had a decline in submissions and readership. In the comments on the announcement there's an outcry of "Nooooooo" and calls for an independent investigation. Now is the time to appreciate the pun-tastic craftiness that was created out of sugary marshmallow treats that some say look better than they taste.

Here's some of the amazing work created over the years, for the Washington Post Peeps Diorama contest and beyond, including a funeral for Twinkies (now resurrected), KISS and Broad City.

In 2014, the Washington Post explained what made a great diorama, using examples like "Occupeep D.C." and "Zero Peep Thirty" and "Rest in Peeps." Important factors included a great pun in the title, detailed design and creative use of materials.

The Washington Post isn't the only newspaper that holds a Peeps contest. In this video, winners from the Dallas Fort Worth Star-Telegram explain the inspiration and materials that went into making their Peeps dioramas, including movies like "The Interview" and fairy tales such as Little Bo Peep.

An exhibit by Virginia's Artomatic gallery featured work from the Washington Post's 2009 entries, including work inspired by Steinbeck's book "The Grapes of Wrath" and Hopper's painting "Nighthawks."

Getting inspired to make your own diorama. Paul's Family and Friend's shows you how they made a Peeps diorama about a Girl Scout troop. While some of the instructions only apply to this diorama, it can be inspiring to get you started.

Looking for ideas: How about getting inspired by your favorite band? This KISS diorama includes a stage and audience.

Still stumped? How about a Peeps diorama based on a TV show you like, such as this depiction of "Broad City."