Reese's is Celebrating March Bracketology with a Recipe Tournament 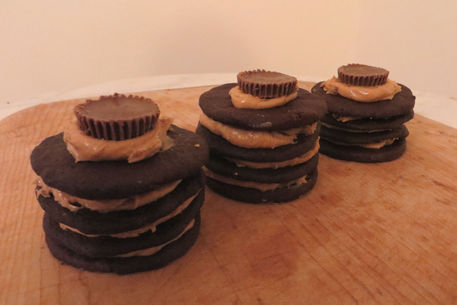 This post is brought to you by REESE’S® Brand. All opinions are 100% mine.

March is a great time for college basketball fans to prove their unbelievable understanding of hoops, stats and school spirit. All you need to win your office pool is get in a Zen-like trance and pick 32 game winners. How hard could that be? Well, it's actually so statistically difficult that Warren Buffet recently offered $1 billion to anyone who creates a perfect college basketball tournament bracket.

But what if you love hoops of chocolate and peanut butter as much as you love dunks and rebounds? There's now a bracket just for you. REESE’S® Peanut Butter Cups and Walmart are teaming up for the REESE’S® Baking Bracket Challenge that squares off 32 recipes against one another (including one I created: Top of the Marquee Tarts). Fans who vote for one of the Game Day Recipes (including mine — hint, hint, wink, wink) are entered to win a $100 Walmart gift card. OK, so maybe it isn't $1 billion dollars, but your odds are winning are probably a lot better. (Plus, in this case, following your gut is practically a requirement.) Top of the Marquee Tarts

1 tsp vanilla   For the filling

Preheat the oven to 325 F degrees.

Mix the flour and cocoa powder in a bowl and set aside.

In another bowl, using an electric mixer, beat the butter and sugar until light and fluffy. Add the vanilla.

Fold in about half of the flour-cocoa mixture on low speed. Be careful not to overmix. Add the rest of the flour-cocoa until just combined. Stir in the salt. The batter will be doughy and possibly a little sticky. Refrigerating it for an hour will make it easier to handle, but it isn’t necessary.

With the rolling pin, roll the dough until a 1/8 inch thick. Remove the top layer of wax paper and using a glass or circular cookie cutter, cut circles in the dough. Remove the extra dough from between the circles and, with a metal spatular or thin knife, transfer the dough from the wax paper to the parchment paper lined baking tray. (You may want to shape the top of the dough to make it smooth or clean up the sides if they’re uneven.)

Bake for 15 minutes, rotating halfway through. The cookies should be firm but not hard when done. Let cool.

While the cookies are baking, unwrap 20 Reese’s Peanut Butter miniatures. Using a sharp knife, carefully slice 10 of them in half, horizontally, and set aside the tops for the decoration of the tart.

In a bowl, mix together the peanut butter, confectioner’s sugar and Resse’s Peanut Butter Cup “crumble.” Fold in the cinnamon.

Arrange the cool cookies into stacks that are similarly sized. Lay down four of them on a clean surface. Using a knife, spread about 2/3rds of tablespoon of filling on three of the cookies. On the fourth (the top), dab about half a teaspoon of filling in the center. Place one of the Reese’s Peanut Butter Cup tops you’ve set aside in the center of the top layer.

Stack the three layers so the filling is even between each and add the top.

Depending on the thickness of the cookie and the amount of filling you use, you should have enough for about 10 tartlets.