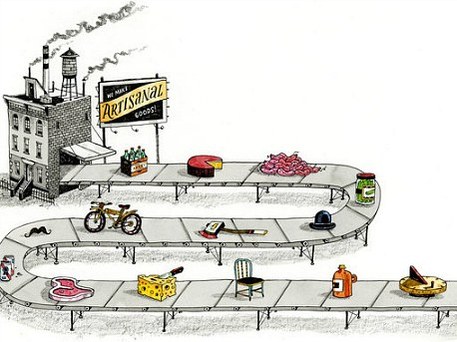 Gourmet Gherkins and the Rise of Specialized Craft Businesses

We present to you pickles, the next It-food of 2012. Designer dills not the stuff of your gourmand fantasies? The New York Times also offers a compelling interpretation of how hyperspecialization (definitely a made-up word) is keeping America's craft economy afloat.
To get your fill on pickles and other craft businesses, skip on over to The New York Times.

DIY Good Times
Whether it's an oversized Operation or even an Angry Birds robot, Popular Science offers a few DIY versions of our favorite games and pastimes. Now we're just waiting for a DIY-version of World of Warcraft. Any takers?
Want even more DIY games, complete with a how-to? Popular Science has more.

Knit It Forward
New Hampshire crafters competed in a 12-hour knit-in, all in support of a local homeless shelter. Using locally-donated yarn skeins, the women raced to finish as many hats and scarves as possible.
To read more about this unique New Hampshire charity, head to Seacoast Online.

Scrap Happy Elton
Concerned their year-old son might misunderstand his own history, celebrity parent Elton John and his partner David Furnish have decided to scrapbook their way to better mental health, giving new (and sweeter) meaning to the phrase "having a paper trail."
To learn more on Elton John's scrapbook, go to The Telegraph.

An Ounce of Craft...
...is worth a pound of cure, says the Daily Mail. According to recent research, organized group activities like baking and gardening have shown to improve memory in elderly patients suffering from dementia or Alzheimer's. Score one (more) for crafting!
The Daily Mail has more on how crafting improves health.