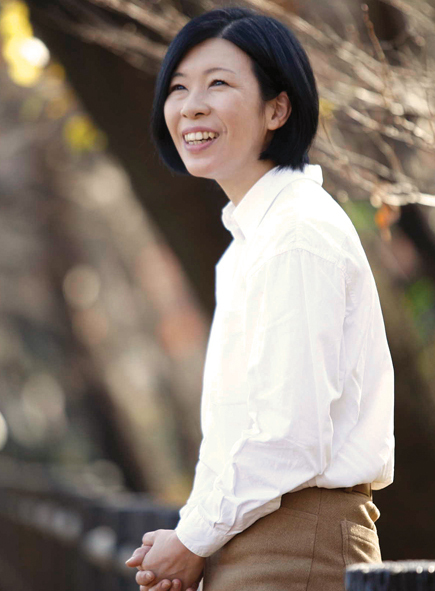 in 2002, but the thought made her squeamish. At the time, her cat “Chi” was spitting up a lot of furballs. Brushing Chi gave Kaori handfuls of hair, a seemingly endless supply that could have a useful purpose. Perhaps turned into felt? Alas, Kaori needed years to accept the notion. In 2004, she started saving Chi's fur in empty seaweed tins, and even then it wasn't until 2005 that she made her first cat-hair felt finger puppet.

(translated from Japanese) explains how to make tote bags, mittens, book covers and more using your cat's -- or someone else's -- brushed-off fur. Often the cat felt is used as an embellishment, so you'll only need a couple of handfuls. (No need for a cat farm.) Kaori writes often about cats and, luckily for us, coming up with questions about cat-hair crafting wasn't too hard.

Where do you get your cat hair?
From neighborhood cats and friends’ cats. At first I was using the hair from my pet cat Chi and my sister’s cat Yuki-chan. When I was writing the book, I got cat hair from acquaintances and a number of other cat owners. When my friend’s mom heard that I was making things out of cat hair she started collecting it for me.
When I began "Crafting with Cat Hair,"

readers saw the pictures of the cats that provided the hair and said “I want to be on the cat hair contribution team!” I thought, “All right, then I’ll make a team!” and started recruiting for “Team Cat Hair” on my blog. This is now my primary source of cat hair collection.

How do you respond to people who think it's crazy to craft with cat hair?
Let them think that if they want to. Fair enough.

Has anyone gotten angry with you about cat-hair crafting?
Only one time. Last fall there was a cat-hair festival in Kyoto and I got an angry call from someone who read about it in the newspaper. She said “How cruel!” and she showed up at the festival. Listening to her talk, I realized she had misunderstood and she thought it was a cat-pelt event. I quickly explained that wasn’t the case and that it was about hair that comes off of your cat when you brush. “We are also opposed to the idea of cat fur pelts,” I told her. When she understood she said, “Oh, that’s okay then.” Since then no one has really gotten angry but my mother sometimes gets a little disgusted with the whole thing. 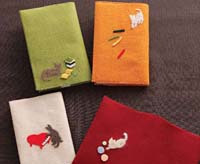 What were some of the positive and negative reactions to the book being published in Japan?
Cats have a shorter lifespan than humans so many owners were trying to prepare themselves for the impending loss of their pet and said, “It’s a wonderful idea to create something in the shape of your cat while he’s still alive, so you’ll have something to remember him by.”

I got a lot of comments from Buddhist priests saying, “In our line of work, we have to wear black or dark-colored garments. We get concerned about our pet cats’ hair standing out against our clothing. Making crafts out of the hair is a great way to creatively use something that is otherwise just a nuisance.”

There is a saying in Japan: “Lend me the cat’s paw” That used to mean a cat is useless. Since I’ve made cat hair serve a purpose, my friends have started saying, “For the first time cats are achieving some success!”

How many cats do you own?
Strictly speaking, I don’t actually own any. There is one in my house now, but it’s sort of an itinerant cat. About 10 years ago there was a cat that used to stroll right into my house every once in a while. These days that cat is here almost every day.

But my house is not the only one she visits. If I go away for two or three days, I think she goes to another house. I know because when she goes to a neighbor’s yard they refer to her by a different name when they pet her. So you see, I don’t feel quite right calling her my cat. My cat “Chi” who originally gave me the cat-hair felt idea is living with my aunt now.

Read more of CraftFoxes' interview with "Crafting with Cat Hair"

author Kaori Tsutaya, including her thoughts on crafting with dog hair.